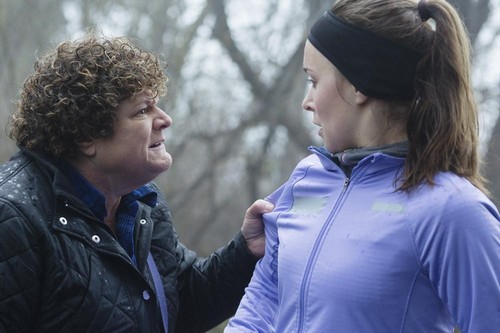 ABC tonight has MOTIVE Season 1, Episode 9 – the new crime drama continues with a new episode entitled, “Framed.” On tonight’s show when a beautiful, young art aficionado is shot and killer, detectives Flynn and Vega’s investigation proves that blood is thicker than water. Did you watch last week’s episode? If you missed it and want to get caught up, then you can read our full and detailed recap here.

On last week’s show detectives Flynn and Vega’s investigation uncovered a Hitchcockian tale of tragedy and desperation in which the deadly act of murder may ultimately have the power to heal.

Tonight’s episode is going to be an exciting one that you won’t want to miss, so be sure to tune in for our live coverage ABC’s Motive tonight at 9 PM EST!  While you wait for the recap, check out the sneak peek of tonight’s episode below!

Julia was an overworked assistant to an art gallery owner. She doesn’t seem scary yet in the end none of these things matter because she’s the victim. However her killer is a sweet older woman, Marion Reider, that’s doing her best to support both herself and apparently her adult son. What could have lead these two women into meeting much less for a murder to happen?

The crime itself wasn’t brutal. Single gunshot wound during Julia’s early morning run. For all appearances the two women probably wouldn’t have been connected. But to do so is to forget her son. He reported his gun missing. The poor guy thinks he’s been robbed when its most likely his mom that took his gun and used it. As he’s talking to the police reporting his “collector’s item”, she’s doing her best to convince to him that he must have misplaced it. She can’t really spell it out for him but the hints are so heavy he must be one marble short of jar.

Meanwhile Vega and Flynn are investigating their victim. They arrive at Julia’s apartment to find something strange. Someone had broken in but they didn’t take anything valuable and even left the keys.

In a series of flashbacks the connection is finally made. Marion had taken to painting several pictures of her cat in order to raise money. She was able to sell a few pieces to a coffee shop. The same coffee shop that Julia frequented. The shop owner was a friend of Julia’s and also her running partner.

Julia has tracked down Marion after seeing her paintings. She bought one of them and she brought the check to Marion personally. Which was odd because she doesn’t appear to be a cat person. While she’s there she tried to see if Marion had any other paintings but the one she had wasn’t of interest to her. The only thing to come from the little trip was that Julia managed to catch Owen’s eye. He’s sitting across from her reeking desperation and she’s completely uninterested.

He never let Julia’s indifference stop him though. He web searched her and then traced her to her job. Like lost puppy he shows up at the gallery begging for whatever scraps she’s willing to give him. Still, she does let him down easily.
Back in the present, Owen is still harping over his guy. He didn’t feel the police were taking him seriously luckily his mom was able to distract him. That is for now.
The police haven’t been lazy. They did make some headway.

Dr. Betty was able to identify the bullet as belonging to post-WWI era. Very rare nowadays. Only a collector would have one. Besides the cops are looking into Julia’s life remember. What her running partner said may have been cryptic but there are other people to question. Katie mentioned how Julia was excited about something. She just didn’t know what it was.

Julia’s boss on the other hand brings up how some guy had come in the other day to chat Julia up. He does go on to mention Julia’s preposterous dream to open up her own gallery. Julia actually quit to follow this dream which was odd to her former boss. He couldn’t understand where she got the money from.

Owen found out that Julia was murdered. He tells his mom that they should notify the police that they knew the woman instead she brushes him off. Finally smartening up Owen asked her how did she know he was missing bullets as well as the guy. He doesn’t ask her outright the question he wants to. He knows better even if he never says it.

The police are able to connect the missing gun’s report to the mysterious guy described from Julia’s former boss. They go into to show a photo and the guy identifies Owen. They track down Owen and confront him over the pile of evidence. His nervousness doesn’t stop him from admitting to the murder. He’s covering for his mom.

Despite his admission, Flynn hasn’t bought Owen’s confession. Sergent Boyd Bloom wants her to drop it. That got a confession that should be good enough but Flynn does convince him to buy her some time. She knows Owen is most likely protecting someone. Owen isn’t changing his story so she’s going to find out for herself. Fortunately for her the evidence falls into her hands. Marion shows up at the police station.

Marion never did give anything way during her short time at the station yet Flynn realizes if Owen was going to protect anyone it would be his mother. They went back to Julia’s apartment and they were able to find out what was missing all along. A painting.

Flynn and Vega show up with Owen back at his house. They begin to corner Marion. First they identify the mark on her hand as a burn. Then they move on to Marion’s art studio. That’s where it all began and that’s where it all ended.

The painting Marion had sold to Julia was a painting she got at the flee market. She only painted a cat over it. Julia was erasing the cat and trying to sell it. It was rare piece the world thought they had lost post-war Poland. It’s worth over a million dollars. Marion found out how she was tricked and shot Julia after she refuses to return the painting. The painting is now ruined when Marion tried to clean the cat off herself.

In the end Marion will never get a dime for the painting. The only good thing to come out of the situation is that she knows her son will stand by her. That will help at least. Especially when she goes to prison.