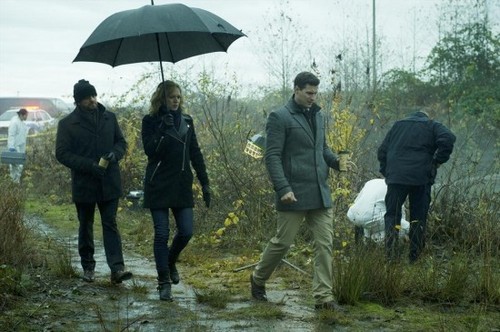 Tonight on ABC their new crime drama MOTIVE continues with a new episode called, “Undertow.” On tonight’s show detectives Flynn and Vega uncover a twisted tale of tragedy and desperation in which the deadly act of Murder May ultimately have the power to heal.  Did you watch last week’s episode? If you missed it and want to get get up, you can read our full and detailed recap here.

On last week’s show when a customs officer murdered a limo driver, Detectives Flynn and Vega searched for the killer and his motive, which leds them to a femme fatale waitress at a dockside cafe – who had charmed the unsuspecting sap into stealing, lying and ultimately committing murder, all in the name of love.

Tonight’s episode is going to be an exciting one that you won’t want to miss, so be sure to tune in for our live coverage ABC’s Motive tonight at 9 PM EST!  While you wait for the recap, check out the sneak peek of tonight’s episode below!

On tonight’s episode the victims seems unsure of himself and not even enjoying a trip to the strip club meanwhile his killer, Charles Stanwyck, appears carefree among his family and even smiles before heading to work. What could have driven them to this?

The victim was both beaten and strangled. His body was dumped and left them him by the water instead of in the water. Dr. Betty is able to help identify the murder as gruesome and methodical. Someone went to a lot of trouble to kill this one guy.

Taylor was his name. He had drugs in his system. Angie and Vega trace the drugs to a notorious dealer who informs them that Taylor had worked for him. In a flashback scene, Taylor is seen telling his girlfriend about leaving the business. They look happy except when he asks his girlfriend to call off her engagement. She refuses so he says they should make run for it. They’re both dreaming about their opportunity when his killer sees the whole romantic exchange.

Back in the present, the killer’s life isn’t as happy as it originally looked. He and his wife no longer look happy and she’s making secret meetings without his knowledge. The killer’s sadness is explained later on. His son had died.

Taylor’s girlfriend, Sunita, is now denying to have ever been in a relationship with Taylor. She’s pretending that they were mere acquaintances when the police inform her of his death. Her reaction only serves the detectives. She’s too distraught and the phone records prove she had more contact with Taylor than acquaintance.
The cops return to question her. She was still planning on running away with Taylor when he never showed. She thought he had flaked but the must be when he was murdered.

The killer knows Sunita’s dad. Charles had been doing construction work at Sunita’s family’s restaurant. The two had made an agreement. It was Vijay Rand that was with Charles when he found out about his son. It was also Vijay that tried to help Charles in his grief. That’s why Charles told Vijay about Sunita running away with Taylor. Charles did end up killing Taylor but that was done in exchange for something. Vijay was following Charles’s wife. Is that all or was there more that Charles asked in return?

They offered to kill someone for each other. It was Charles’s idea. However Charles was too sloppy. He left dry wall all over the victim and he left Taylor’s car behind the restaurant. Vijay is scared and no longer wants to kill Charles’s victim but Charles came too far for Vijay to wuss out. Anyway he got insurance. Vijay might have an alibi but his fingerprints are still on the murder weapon. Nothing is going to stop Charles from wanting someone dead. Who is this person?
Vijay got close to killing the mysterious person only to be interrupted by Charles’s wife. The mysterious person Charles wanted dead was his brother-in-law. Vijay’s botched attempt really ticked Charles off. His brother-in-law was the one driving the car the day his son died. Charles is all set to kill the guy himself when the police get the both of them.

In his last moments of freedom Charles tries to get Flynn to understand. His son wasn’t even in a car seat. The brother-in-law had him standing up in the front. Yet the guy gets to walk away. Yet nothing Charles says matters. As her parent herself, Flynn refuses to empathize with him.