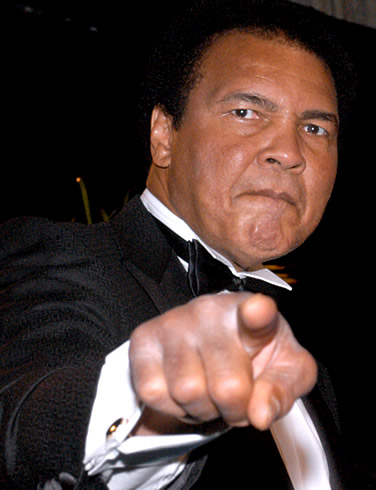 Muhammad Ali is just “months” or “days” away from death, according to his brother Rahman Ali. Rahman has opened up about Muhammad’s health problems, saying that the 71-year old doesn’t even recognize his own family members anymore. In fact, it has become so serious that he can’t speak and has slight hearing problems with his right ear according to reports.

Rahman is worried that his brother won’t hold out any longer, claiming that he hasn’t seen his brother happy in a very long time; the only thing he does these days is visit the doctor to see if he’ll make it through for a couple of more months. Now – this is not some kind of sell-out story, considering that the two are very close, Rahman is just letting the fans know what they want to hear, and he’s being honest about it.

“My brother can’t speak — he doesn’t recognize me,” Rahman told the newspaper. “He’s in a bad way. He’s very sick,” he tells the British newspaper. “It could be months, it could be days. I don’t know if he’ll last the summer. He’s in God’s hands. We hope he gently passes away.” Rahman continued to praise his brother in the interview, adding that he was a huge inspiration to a lot of boxers, but the thought of planning a funeral hasn’t slipped from his mind ever since his brother started getting very ill.

“He’s going to heaven, there’s no doubt,” he added about his brother. “If his funeral was tomorrow, all the statesmen of the world would turn up. He touched everyone from the rich to the poor. I love my brother over anybody. Of all the famous people who ever lived, he’s the best. Everyone knows Muhammad Ali. He’s up there with Jesus Christ.”

Muhammad Ali ended his career as a professional boxer when he lost to Jamaican fighter Trevor Berbick in 1981. His stats stand at 56 wins and 5 losses. Wow – what a tragic story. We’re keeping Muhammad in our prayers and hope he manages a couple of more years. Seventy-one isn’t exactly old. So sad.