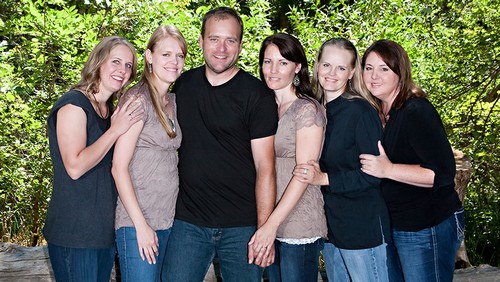 Tonight on TLC after how successful Sister Wives has been they will debut a special about an bigger polygamous family, the Williams.  The show is called, MY FIVE WIVES and on tonight’s show we will meet the Williams family, a progressive polygamist family who believe in love and commitment rather than religion. Despite ongoing hardships within their community, this modern family presents a fresh and honest look at a very controversial lifestyle.

The show follows Brady Williams as he balances the needs, hopes, frustrations, and fears of each wife along with his own, the special offers a candid and open look at this controversial lifestyle, and goes behind closed doors to share the intimate details and complicated decisions they have to make as a larger than average family.

Brady was born into the Mormon Church, but until age 16, he had never heard of polygamy. At that time, his parents converted to a faith that embraced the plural lifestyle. Until the age of 36, he grew as a church leader before he and his family decided to break away from their church. Brady currently works as a project manager at his brother’s construction business, while also pursuing a degree in philosophy at the local university.

We will be covering My Five Wives premiere tonight at 9 PM EST so don’t forget to come back to this site for our full and detailed recap.  Make sure to refresh often to get the most recent details.  While you wait for the recap, let us know how excited you are about meeting the Williams a progressive polygamist family.

Brady Williams has 5 wives and 24 children. He lives in a small polygamous community. Three of his wives (the first three) live in the one house and the other wives live in another. Each wife has her own apartment complex sort of. They each have a kitchen and her children are allotted their own space near their mother. He had 5 wives by the time he was 29 but he had originally grown up in the mainstream Mormon Church and left when he was 16.

Surprisingly the family has since left the Mormon religion as a whole. They had come to the conclusion it wasn’t working for them anymore. Usually that would be fine but remembering where they live that makes them outcasts among the rest of the polygamist.

Paulie is the first wife and she and Brady have 6 children. They’ve been married 22 years. They had only dated for 6 weeks before they got married which isn’t unusual. Short courtships are the way things are in polygamist marriages. Unlike the stereotype (mostly seen on Big Love than Sister Wives) she doesn’t have control over the other wives and instead feel proud that she was there to see the other wives come into the family.

Paulie and Brady just had their anniversary although Brady didn’t remember their special anniversary. He says he can’t recall all five anniversaries and his wives have come to understand he will rarely remember any of the dates.

Robyn is the second wife. She and Brady have 5 children. She married Brady eight months after Paulie. They’ve been married 21 years. She’s in the unusual position of sharing a birthday with Brady. She would want Brady to share her birthday with her but that wouldn’t allow the other wives to share in Brady’s birthday.

Rosemary is the third wife. She and Brady have 4 children and they’ve been married for 18 years. She fell in love with Brady but it took him a while to return the feelings. She didn’t have a smooth transition. The other two wives were quiet and she felt if she ever got loud she would be obnoxious. One of the biggest problems with her family is that she considers herself to be the fattest wife. The other four are skinnier and she constantly worries that Brady would rather be making love to them rather than her.

Nonie is the fourth wife. She and Brady have 5 children and she’s been married to Brady for 15 years. Her experience was like Rosemary’s. She came into the family and felt she lost herself in trying to fit in. They both used the word suppressed. That’s how they were able to make their own personalities to go along with the rest of the wives.

Like any other family they’ve had to cut back because of the recession. Nonie is the worrier and yet she wants another baby. Brady feels like he’s stretched thin enough with the 24 he has now. He’s willing to think about it though for Nonie.

Rhonda is Brody’s fifth wife. She and Brady have 4 children and they’ve been married for 14 years. She had met Brady before first. They had dated when they were teenagers but after they broke up he married everyone else. They got married 10 years after they first dated. She’s the easiest to get along with but she claims it took her 8 years to feel like she belongs. Right now she’s getting broody just like Nonie. She doesn’t want to go through pregnancy. She actually is considering adoption. She suffered through several miscarriages and one of them she ended up hemorrhaging too bad one time.

Adoption is expensive and so Brady has to put up the option to the family for a vote. This makes Rhonda worried her sister wives will shoot it down.

For the wives birthdays Brady gives the wife kisses for all the years she’s been alive. However he does this publicly. The kids take all of this in good fun and the wives get jealous. It’s hard to watch their husband show another woman affection. Also they feel hurt that they never get to spend Brady’s birthday with him. It’s always Robyn.

One of the first things they address at the family meeting is the birthday situation. Robyn doesn’t want the other wives to be mad with her and so she wanted to find another way to celebrate Brady’s birthday. Once that situation gets solved though Rhonda’s adoption comes on the table. Nonie feels now is the time to say she wants another child for herself to be on the table. Rosemary thought that was inappropriate.

Back to Rhonda’s dilemma. They didn’t shoot her down but they did say the adoption agency won’t want to give a baby to polygamist. They might have to sue in order to be treated fairly. In other words let the situation say “no” for you.