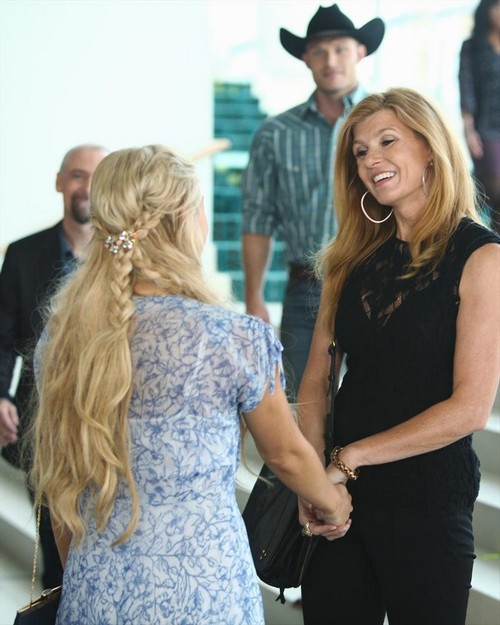 NASHVILLE returns to ABC tonight with their a whole new episode called, “Never No More.” On tonight’s season 2 episode 2 Juliette is teh regigning Queen of Country, though her title is being overshadowed by Rayna’s return to Music City and a reality show standout nipping at her heals.  Did you watch week’s season’s premiere? We did and we recapped it here for you!

On the season premiere, after the crash, Rayna was in coma and Deacon was left to wait on his pending jail sentence. Teddy was still shell-shocked about Peggy’s pregnancy and struggled to understand where he belonged… Was it by Rayna’s side with his daughters? Meanwhile, Maddie grapples with the revelation that Deacon was her father and, feeling alone, turned to Juliette, unwittingly revealing the details of what happened before the traumatic crash. And Gunnar and Scarlett’s relationship became even more complicated after the proposal, so they turned to their friends, Will and Zoey, for support.

On tonight’s show Edgehill has appointed a new chief, Jeff Fordham. He’s powerful, sexy and on a mission to place the label back on top. That means it’s time to reveal his vision for the future. The question is — who will be part of it? Rayna has returned from her hiatus and the plan includes her own label, with Will and Scarlett attached. Though Jeff seems supportive, he has a different agenda. Juliette meets with the chief to discuss her new mature sound and look. She details her passion to grow and her natural desire to be taken more seriously as an artist. Jeff could care less. In the meantime, a reality show vixen is the talk of the town and posing a new threat to Juliette’s career.

Tonight’s show opens with Rayna coming home from the hospital.  Also Juliette is appearing on Conan and Conan talks about how she was praying for Rayna.

Avery has had 13 appearances in two weeks.  He tells Juliette that it was a great show on Conan and Juliette asks Avery if she is ever going to be able to do an interview that is not about Rayna.

Rayna is talking to ?? about her label she wants to protect it.  She tells? to get Scarlett and Will.  Scarlett come over to see Gunnar and he tells her the couch got torched and gives her money to cover the cost.  Gunnar tells Scarlett that Jeannie is pressuring him for songs.

Juliette tells the head of Edgehill, Jeff Fordham that he is Nashville now and he has to say Y’all.  Jeff tells Juliette that her album is not selling great and Rayna James’ album is outselling her.  Jeff invites Juliette to visit him at his house because he is a big fa.

Rayna comes to see Scarlett she is surprised that Rayna is back at work already.  Scarlett lets Rayna know she is living with Deacon.  Will comes in and compliments Rayna.  Juliette sees Rayna and is surprised she is back.  Rayna thanks Juliette for the prayer meeting.  Bucky, Scarlett and Will of Highway 65 come to see Jeff.  Jeff  tells Rayna that he has been most excited about seeing her.  He is ready to invest in her right now.

At home Scarlett wants to cook for Deacon but he is crabby.  Scarlett is worried he is upset she is working with Rayna.  Deacon assures her he is not.  He just wants her to be careful.

Jeff comes to hear Will play and tells him he is the future of country music.  Jeff tells Will that he has not signed the contract with Highway 65 and if he does not Jeff will build him up without Rayna.

Rayna sits down to talk to her daughter.  Maddie is really upset she does not know what to do about knowing Deacon is her father.

Will sees Brett outside the club and gets upset.  He then finds out that Brett is working for Jeff

Juliette and Avery is heading down to Alabama – to try to please Jeff and promote her album.

Rayna thanks Teddy, he vows he will always be there for her and his kids.  Bucky comes in to go over contracts.  Bucky tells Rayna that Jeff is trying to poach Will.  Rayna is shocked.

Deacon is driving with Juliette  she is hijacking him and taking him to the doctor.  Deacon thought he was going to the store.  Deacon gets upset but she tells him to sit there they are going.

Juliette and Avery land in Atlanta at a trailer park.

Gunnar is trying to write a song and Will walks in and asks if it is a song or a jingle.  Will tells Avery that Jeff tried to pouch him.  Avery tells him he does not want to hear him complain.

Rayna barges into Jeff’s office and asks her why he is trying to pouch Will.  Jeff tells Rayna that her fledgling label is not the place for Will to start.  Rayna warns Jeff she won’t let him take Will from her.

Juliette is doing an interview in Alabama and tells them she is so happy to reconnect.  A women Juliette knew when she was young and walks up and hugs Juliette.  The women is very emotional and Juliette is a bit disturbed.  She made Juliette a quilt and Juliette gives it to Avery.

Rayna is speaking to Will – she tells him that she understands he is flattered about the head of the label Jeff telling him he is the future of country music.  Rayna tells Will she feels they can do something special together.  She wants Will to come to Highway 65 so she can protect him and help him find his voice.

Chaley talks to Gunnar and tells him that Scarlett told her everything about him.  She knows Gunnar has writers’ block and she suggests he writes about being broken hearted.

Deacon talks to the doctor and she offers him pills for the pain in his hand and he refuses.  She suggest physical therapy to help the hand.  She tells him if she puts  a cast and the hand is immobile it won’t be good.

Brett comes to see Will and tells him he does not have to be afraid of him.  He assures Will that he won’t be the man who destroys him.  Brett tells Will to trust him.

Juliette is still giving and interview about the trailer she grew up in.  She gets upset and asks them to cut.  Avery comes over and asks if she wants to talk about it.  She responds, “I am just trying to sell records.”

Deacon called Rayna to come and see her.  He is at a memorial her fans made for her when she was ill.  Deacon tells her that he may not be able to play again.    Rayna tells him that they have brought each other so much pain and she does not think they can save each other.  They might have to save themselves.  She hands him a ring and tells him she thought he might need it someday.  She leaves….  He throws the ring in the memorial.

Rayna gets home and Teddy is there Rayna tells him they should not be playing house because it is confusing to the girls.  Teddy tells Rayna that he missed their family and finds it hard to believe that she does not.

Rayna’s girls are talking.  Rayna does not want to go to the party tonight she wants to take care of her girls.  Tandy tells her to go.

Gunnar is singing at open mike night.  He is singing a new song about the biggest heartache he ever had.

Will tells Gunnar he is impressed with his song writing. He calls Gunnar a great song writer.

Rayna and Bucky show up at Jeff’s party.  Will shows up and Jeff officially welcomes him to Edgehill.

Juliette gets to the party and she tells Jeff that her album hit #1 on iTunes.  Jeff introduces Juliette to a singer from a reality show Layla who came in number 2 on the show.

Scarlett is back at Deacon again and tells him to man up and stop being a coward.

Bucky asks Rayna if she is okay and she assures him she is.  Will comes over and apologizes to Rayna.  Will tells Rayna he is not an artist he is just a guy who likes singing other people’s songs.  She tells him to watch his back.

Scarlett comes to the party and sees Avery.  Avery asks how Deacon is doing she tells him she does not know.

Back at the house deacon gets a saw and he is sawing his cast off.

Jeff has a stage set up at his house and he introduces Edgehills newest artist Layla the reality show girl.  He also announces that her single is now at #1 on iTunes.  Juliette is shocked and upset.

Rayna tells Bucky she has been making a lot of changes lately and she starts to think that she does not belong at Edgehill anymore.  Bucky tells her not to make any drastic decisions.