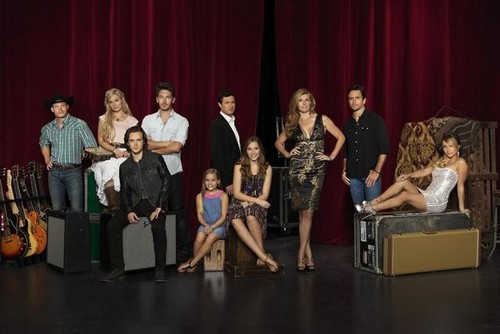 NASHVILLE returns to ABC tonight with their season 2 premiere called, “I Fall to Pieces.” On tonight’s season premiere Deacon and Rayna try to heal their woulds after their traumatic crash.  Did you watch last season’s finale? We did and we recapped it here for you!

On the season 1 finale the show ended with Juliette discovering a letter from Jolene revealing her mother’s true feelings; Rayna and Deacon’s fairytale evening at the CMA Awards, even performing with Brad Paisley – who guest stars as himself — did not end in a happily-ever-after; and Gunnar was willing to do what it took to win Scarlett’s heart back.   Meanwhile the U.S. Attorney’s office was closing in on Teddy.

On tonight’s season premiere after the crash, Rayna is in a coma and Deacon is left to wait on his pending jail sentence. Teddy is still shell-shocked about Peggy’s pregnancy and struggles to understand where he belongs… Is it by Rayna’s side with his daughters? Meanwhile, Maddie grapples with the revelation that Deacon is her father and, feeling alone, turns to Juliette, unwittingly revealing the details of what happened before the traumatic crash. And Gunnar and Scarlett’s relationship becomes even more complicated after the proposal, so they turn to their friends, Will and Zoey, for support. 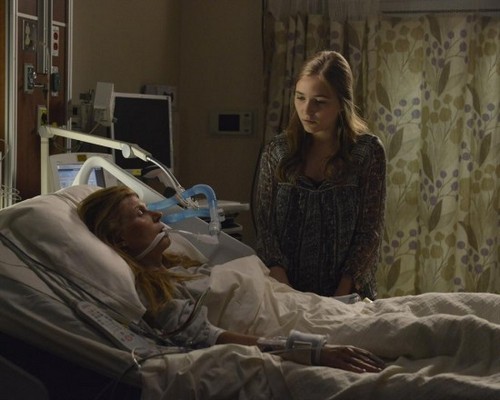 Tonight’s show opens up at the car accident Deacon manages to gets Rayna out of the car.    We see a flashback of Rayna with Deacon when she was  a lot younger and before she was famous.

Rayna is in the hospital, her daughters are at her bedside.  Rayna is in a coma because her brain is swollen.  She has been in the coma for two weeks.

Deacon is in court he is being charged for driving under the influence.  Rayna’s husband, Teddy does not want him to get away with what he did.  The judge sets his bail at $1 million dollars because of his past charges.  Deacon tells him he wants to plead guilty the judge warns him if Rayna dies his charges will be upped to involuntary manslaughter.

Juliette is watching the news about Rayna in the hospital.  She is upset because now she feels she is competing against, “saint Rayna.”  Glenn, her manager tells Juliette she needs a break, Juliette does not want  a break.

Scarlett gives Avery a free drink and tells him it is her last night and he is not to tell anyone it is on the house.  Scarlett is worried about Rayna being in a coma.  Her friend assures her she has a signed record deal and all will be okay.

Avery is performing at the Bluebird Cafe as Scarlett watches with her friend.

Gunner is upset about his breaking up with Scarlett.  Will tells him the way to get over a breakup, is to get drunk and get loud and party.

Juliette is sleeping with the applicant for a job with her.  The news is on and she sees that Rayna’s fans are causing social media to trend.

Deacon is in jail and he is told he better hope Rayna pulls through.

Juliette is rehearsing and she tells Avery that there are four news songs in the set.  Scarlett goes to see Juliette and asks Juliette if she can help her.   She wants some money to help get Deacon out of jail.  Juliette refuses and tells Scarlett that an addict is an addict and she should let him go.

Gunnar is at a party and Will introduces him to several girls.

Teddy’s girlfriend Peggy is pregnant she confirmed it with 3 tests.  Teddy tells her he has not time for it, he can offer her financial support and that is it.

Rayna’s father is sitting with her at the hospital Tandy comes in.  She tells her Dad he does not have to leave even though the girls are coming.  Rayna is still in a coma.  Tandy tells Lamar (Rayna’s Dad) to talk to her it will help.

Meanwhile Rayna in the coma is having Deacon flashbacks of the early days.

Back with Deacon, his court appointed attorney comes to see him and tells him they are delaying the case to see if Deacon dies.  The attorney asks Deacon what happened.  Deacon admits he was drunk and crashed the car.

The doctor is with Rayna and they are going to bring her out of the coma.  Her girls are there as Rayna wakes up.  Their Dad Teddy comes in and takes them out.

Peggy is getting an ultrasound, she is amazed at what she is seeing, the doctor looks worried and then she tells her she has miscarried.

Juliette is at her concert and it is about to start and then she tells the people at the concert she wants to talk about someone really important to her.  She tells them that without Rayna’s influence she would not be here.  She then goes on to mention how she has been so honored to appear on stage with her idol, Rayna.  She dedicates the next song to Rayna and tells the crowd she hopes she does it as well as Rayna.  She proceeds to sing, “This Love Ain’t Big Enough for the Two of Us“

Will takes a man into a room and asks him if he knows this is where he lives.  Will slams the guy into the wall and some girl walks in and Will accuses the guy of making a pass at him.

Back at Juliette’s concert and she tells the crowd that it is hard to be so close to Juliette in a coma.  She asks the crowd to meet her at the hospital to pray for Rayna.

Juliette has not fooled Avery and he tells her he has noticed that although Juliette spoke a lot about Avery it was all about her.  Avery tells Juliette he is going to the Bluebird Cafe for Scarlett’s party.  Juliette tells Avery don’t bother Scarlett is not that into him.

Back at the hospital Rayna’s daughter is looking at photos she finds it hard to believe that Deacon caused the crash.  Teddy assures her he did.

At jail Scarlett is visiting Deacon and tells him he is trying to get bail to get him out.  Deacon tells Scarlett that he is a drunk and he is no good to anyone.  Deacon warns her to stop coming to see him.

Gunnar is talking to a girl and he tells her Scarlett is everywhere even on the couch.  She tells him to forget her and suggests he burns the couch which he does, he has a bonfire.

Meanwhile Juliette heads to the hospital to visit Rayna and all the fans follow her.  Rayna’s daughter comes out and sees Juliette and hugs her she is so happy to see her.   Her daughter tells Juliette sometimes she thinks no one understands her and she feels she has no one to talk to her.  Juliette gives her, her phone number.  Rayna’s daughter feels guilty and Juliette tells her she has nothing to feel guilty about.

Scarlett is late for her leaving party at the Blue Bird cafe she is upset.  Scarlett is worried that maybe everyone is right about Deacon.  Chaley tells her to suck it up finish her shift and then they are going to party.

Juliette comes into Rayna’s hospital room to see her.  Rayna’s daughter Maddie tells her she keeps waiting for Rayna to open her eyes.  Meanwhile Rayna is still having flashbacks.

Deacon’s lawyer comes to see him, she has figured out that Deacon was NOT driving the car Rayna.

At the Bluebird Avery toasts Scarlett she leaves to hang up her apron and Gunnar walks in.  Scarlett asks if he came for her Barbeque.  Gunnar tells Scarlett he knows why she said not.  He wants to join the festivities for her leaving.  Avery comes in and tells Scarlett they want her to do a song.

Avery walks up to Gunnar and comments he cannot take NO for an answer, and Gunnar responds, “It looks like the both of us.”

Scarlett gets on stage to sing and she asks Gunnar to get up and sing with her.

Peggy meets with Teddy and lies and tells him she heard the baby’s heartbeat.

Juliette is upset, she was moved by seeing Rayna.  Juliette is crying she calls Scarlett.

Deacon is still in jail and upset.

Rayna is still in the coma.

Scarlett thanks Gunnar for singing with her.

Teddy is with Rayna in the room and Lamar comes in.  Lamar tells Teddy he wished he loved Rayna more.  Teddy tells Lamar he did the best he could but he saw the writing on the wall.

Meanwhile Rayna in her coma is having flashbacks of the accident.

Scarlett goes over to Deacons house and it has been trashed.  Juliette shows up and confirms that her people are working on Deacons bail.  Scarlett wants to know what set Deacon off.

At the hospital they have taken the breathing tube out of Rayna.  They are verifying if she recognizes anyone, she confirms she does.  The doctor tells her family they can come in.

Deacon’s lawyer shows up and tells Deacon he is being released.  He asks if someone posted his bail.  She tells him, no, that Rayna woke up and confirmed that he was not driving.

The US Attorney’s office comes to see Tandy and she tells him she will not help them get her father.  He tells Tandy that her father was involved in their mother’s car accident.

Lamar (Rayna’s Dad) is talking to Rayna and he tells Rayna that Deacon was not good for her.  Rayna tells Lamar she is just going to live her life from now on and not look back.  Lamar tells her that is a good idea.