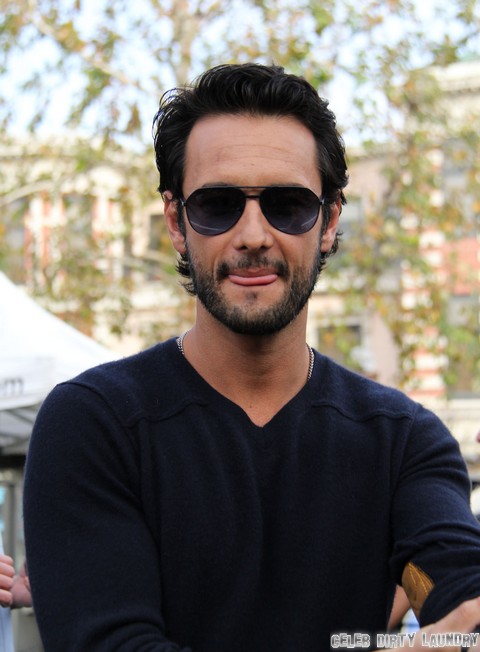 Natalie Portman has just signed on to the upcoming movie Jane Got A Gun, but husband Benjamin Millepied isn’t too happy about his wife’s employment. The two are basking in the joy of parenthood, and are planning to move to Paris next next year, as Millepied will be director of dance at the Paris Opera Ballet. But a new report has us wondering if the couple will make it until then. The couple met in 2009 while working on Black Swan, and quickly got pregnant and married. But it seems that Natalie is too eager to be reunited with ex Rodrigo Santoro, and Benjamin is worried!

Natalie “suggested Rodrigo for the role” in Jane, reports inTouch Weekly, print edition February 25, 2013. “Natalie and Rodrigo are going to be in close quarters and spending a lot of time together,” an insider explained. The movie is about Jane, whose husband is being hunted by a gang. Only ex-lover Fitchum (played by Santoro) can help save them. It’s hard to say, but it seems like the sort of movie that will end with a change in marital status, and Ben isn’t happy that his wife will be getting close with her ex! Sure, he’s a skilled actor, but did she have to put him up for the role?

Honestly, what does Ben want from Natalie? If she sticks to the acting profession, she’ll be spending a lot of time kissing other men, and working with exes. He’s already put a ring on it, and knocked her up. What more of a commitment can he ask for? Besides, they’re moving to Paris together. She’s leaving her entire life behind so he can follow his dream. Most couples fight extensively about long-term travel, but the two seem eager for the change of scenery. Ben has nothing to worry about—if anything, his anger is just pushing her away! Do you think Natalie will stray?