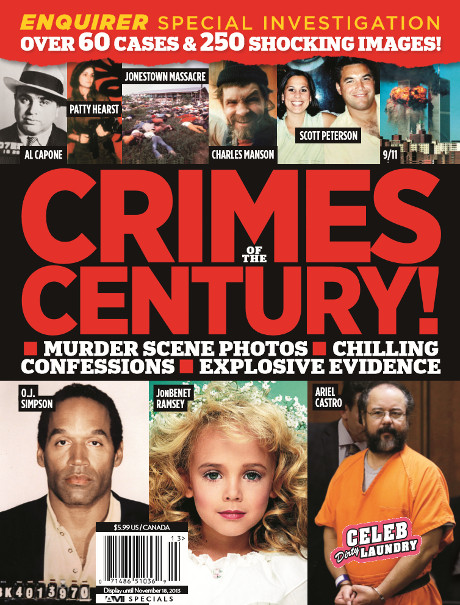 A special magazine put out today, October 1, by The National Enquirer features over 60 court cases alongside 250 striking, shocking images documenting some of the most scandalous and shocking court drama that’s occurred over the century. The bold cover, labeled with the headline “Crimes of the Century,” promises “murder scene photos, chilling confessions, and explosive evidence” that just might have you questioning the facts.

Some of the shocking subjects within the special issue include O.J. Simpson, Ariel Castro, Al Capone, Patty Hearst, Charles Manson, Scott Peterson, as well as some coverage on events that shook the world, including 9/11 and the Jonestown Massacre.

Read about what really happened to poor little JonBenet Ramsey and learn about the grisly evidence that has never before been made public. Find out what investigators actually saw when they discovered the carnage at Sharon Tate’s home – The Manson Family murdered eight-and-a-half months pregnant Sharon and did unspeakable things to her corpse – as well as to the other four victims murdered at her home that night.  Expect to shocked by the detailed pictorial description of O.J. Simpson’s brutal murders of Nicole Brown and Ronald Goldman during his cocaine-fueled rage.  This magazine will become a collector’s item and is an invaluable reference for all those who want to know more than regular TV news is allowed to show you.

We know the Enquirer isn’t afraid to present the gritty side of things so, if you do decide to check out this special issue, go into it with a cautious and open mind. Will you be checking out this special issue? If so, let us know in the comments section below what answers you hope to find within its enlightening pages!