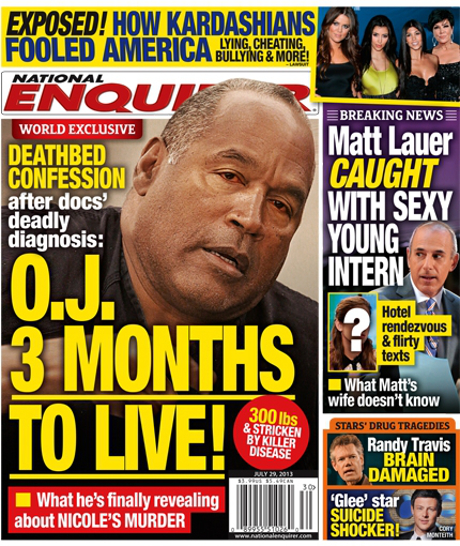 On the most recent cover of the National Enquirer, O.J. Simpson steals the cover story with headlines that allude to the fact that he only has 3 months to live — and also possesses a startling confession regarding the murder of Nicole. While the cover doesn’t reveal the type of ailment, it “confirms” that doctors have diagnosed him with a life-threatening illness: “300 lbs and stricken by killer disease,” reads the mag.

Also featured in the magazine is startling news regarding the current state of country singing legend Randy Travis, who’s supposedly suffering from elaborate brain damage after his recent medical scare.

Travis was rushed to Texas’ Baylor Medical Center on July 7 before being transferred to The Heart Hospital Baylor, where doctors couldn’t keep him from slipping into a deep coma.

Through exclusive interviews with close relatives, The ENQUIRER offers a blow-by-blow account of how Randy’s brain wave readings dropped to nearly nothing – and docs were close to declaring him brain-dead — before he miraculously rallied.

But the Nashville legend is not out of the woods YET, as an ENQUIRER investigation reveals why the family is still praying for a miracle.

In other news, the mag also has a story about Matt Lauer, claiming he’s undergone a shocking, sexy affair with a young intern: “What Matt’s wife doesn’t know!” Go pick up a copy of the magazine to find out what Matt’s been hiding from his wife — if you care at all about that sort of thing.

Do you think O.J. really only has three more months to live or do you think that story’s just a bunch of bologna?