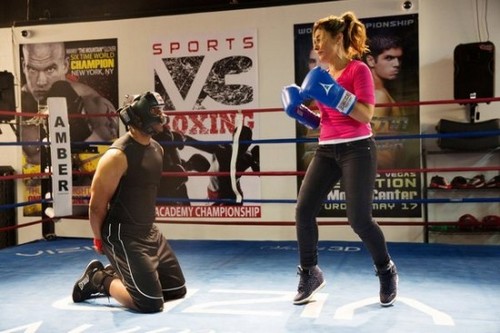 Tonight on USA Network NECESSARY ROUGHNESS continues with a whole new episode called, “Sucker Punch.” On tonight’s show Abby is brought into the V3 fold, but it’s unclear whose side she’s really on.

On last week’s episode Dr. Dani treats two track stars with a bad case of sibling rivalry. TK’s quest for his first championship ring is put in jeopardy. Nico searches for a washed-out athlete, who just might be the missing piece to the V3 puzzle.

On tonight’s show Dr. Dani (Callie Thorne) trades punches with a championship boxer (guest star Pooch Hall) who wants to get back in the ring.  Elsewhere, TK (Mehcad Brooks) seeks treatment at the V3 clinic while Nico (Scott Cohen) follows a new lead that takes him to the clinic as well.  Later, Abby (guest star Autumn Reeser) is brought into the V3 fold, but it’s unclear whose side she’s really on and Connor McClane (John Stamos) learns the truth about someone at the firm.  Guest Stars: Pooch Hall

Tonight’s season 3 episode 9 looks like it is going to be great and you won’t want to miss it, so be sure to tune in for our live coverage of USA Network’s “Sucker Punch” at 10:00 PM EST! While you wait for our recap hit the comments and let us know how excited you are for the season 3 episode 9 of Necessary Roughness tonight.

Dr. Dani can’t help be unhappy with Nico’s involvement with the FBI. It’s one thing to take down V3 and it quite another to have her patients at risk. Nico understands she’s apprehensive and promises that her clients won’t get dragged into the case.

TK is feeling like he can get back to football before he knows it. Especially with the promises V3’s clinic has been giving him. He’s super hyped about returning to the field but also he now has gotten some recognition from the boss. Connor guarantees that once he’s back in shape he can make profitable deals with SheK brand.

TK was feeling worried earlier because Dr. Danni had warned him that they’ve already been through something that was too good to be true. So before he can fist bump his way into a deal he asks Connor to clarify on whether the clinic is for real or another A-Rod situation. Connor doesn’t get offended or suspicious; he simply tells him that everything is on the up and up.

Stuart the assistant from hell has been wrecking Dani’s life. She tried to reach out to Paloma and get her to come back but she refuses. She was about to make a second attempt when she finally got the chance to meet Agent Bennett. The FBI told Nico they wouldn’t bother Dani and yet here there are.

He threatened to have her records subpoena if she doesn’t provide information that can prove to be useful. She gets out of giving anything but now she’s mad that Nico couldn’t keep her out of it. He did just promise. But Nico didn’t know what the FBI was planning and he says he’s going to fix it but how?

Well first off he assaults a federal agent. There’s no proof of it if anyone were to look but the message is clear. Stay away from Dani.

In amidst of all this, Dr. Dani get a new patient. A boxer named Blake has suddenly become glove shy. He became this way after he knocked out one time. He would have quit but he has a wife, an ex-wife, and three kids to support. He needs to get back in the ring.

Connor and Abby have been enjoying their new found friendship. He even brought her on board at V3. Too bad she was planning a coup with his second in command, Troy. Troy has Abby wearing a listening advice during all her meetings with Connor. Yet in the deal he’s worked out with Abby, has he told/warn her about Danni and what he tried to do with Paloma.

Espionage is all around. Nico hired an renowned hacker to break into the clinic’s software. Although the same guy that broke into NASA couldn’t break into V3’s clinic. Luckily Nico has a plan B. He goes to TK for help. TK was just about to cave on the clinic, what with his fiancée pressuring him, when he got Nico’s call.

Dr. Dani’s case involving the boxer has gotten ugly. The boxer miraculously got over his hang up just in time to inappropriately kiss Dani. She pushed him off but someone got a picture of the kiss and sent it to Dani. She immediately goes to Connor wondering if he set her up when he says he didn’t send Blake to her. He calls in Troy and even Troy denies having any part in.

Once Dani leaves the men alone, Connor asks Troy what he’s planning. He knows that Troy is planning something. He just doesn’t know about Abby. The real reason Troy got Abby to wear a device is because all the evidence to shady dealing lead to him and not Connor.

Paloma makes a surprise visit to Dani’s home. She said she knows who’s trying blackmail her. She goes with Dani to V3 and to meet Connor. She tells Connor how Troy has been trying to get rid of Dani from the beginning. Together the two women watch as Troy is fired. As thanks for helping him nail Troy, Connor rehires Paloma for Dani.

Losing his partner has Connor seeking solace in Abby. He tells her he’s crazy about her and she gives the tape she had on Troy. She was a double agent the entire time for Connor. Maybe their romance is for real.

Nico hands over the drugs TK provided for him to the FBI. With such evidence Nico is now free from any obligations. He tells Dani he’s free and that he did as he promised. He protected TK. As a reward Dani is starting to trust him. She shows her trust by stripping naked.

On a side note it wasn’t Troy that set up Dani with the boxer. It was Connor.