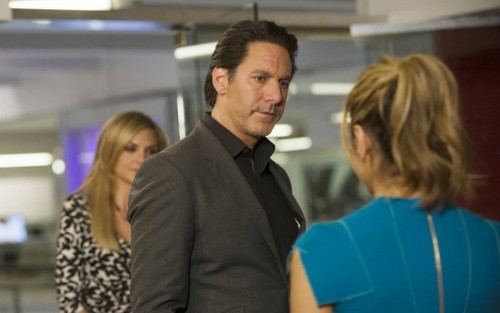 Tonight on USA Network NECESSARY ROUGHNESS continues with a whole new episode called, “Sympathy For the Devil.” On tonight’s show TK may be benched for the big game and Nico has a surprise visitor.  Did you watch last week’s episode?  We did and we recapped it right here for you.

On last week’s episode Dr. Dani traded punches with a championship boxer who wanted to get back in the ring.  Elsewhere, TK sought treatment at the V3 clinic while Nico  followed a new lead that took him to the clinic as well.  Later, Abby was brought into the V3 fold, but it was unclear whose side she was really on and Connor McClane learned the truth about someone at the firm.

Tonight’s season 3 finale looks like it is going to be great and you won’t want to miss it, so be sure to tune in for our live coverage of USA Network’s “Sympathy For the Devil” at 10:00 PM EST! While you wait for our recap hit the comments and let us know how excited you are for the season finale of Necessary Roughness tonight.  Also check out a sneak peek of tonight’s episode below!

Connor is about to flee the country wen Dr. Dani stops him. Not only does she do that but she wants some answers.
72 Hours Earlier…

Dani is in her lovey just had sex stupor with Nico. She can’t wait to go back to that stupor but first she has to deal with Nico’s phone call. Agent Jerk Face has news on the sample Nico brought in. Apparently what they were trying to give TK would have changed his DNA. It’s completely untraceable and also illegal.

TK is horrified by the news but his fiancée doesn’t see anything wrong with the meds. Given the chance she would have convinced TK to take it. As long as her man remains a football star.

Danni and Nico return to the agency trying to play it cool until Cameron introduces a woman to Dani. She sensed something was up however she never thought she’d meet Nico’s wife. By the smirk on Cameron’s face he knew exactly what he was doing when he made introductions. It’s one thing to play Dani and its quite odd to enjoy her squirming.

Nico’s wife came for a visit not as set-up. She merely wished to give Nico the divorce papers in person. Although even she caught on that there was something between Nico and Dani. Seeing that she did notice then couldn’t she out of kindness couldn’t she have pretended to be a friend or anything else than what she was?

Now Nico has to explain himself. He married his ex in order for them to never be able to testify against each other. Still it’s too late. She can’t be in a relationship with someone so secretive he could be an episode of “Lost”. She doesn’t find it entertaining. She could have probably rip more into him if she hadn’t found Darryl Hutchinson.

Dani goes to see him and hear about what happened at the clinic. Hutch tells her all what happened. The whole operation was doing without Connor ever being involved. He was so ashamed he retired . He didn’t want to find out if he was worst off without the drug. Dani is sad to hear it and she’s still curious how Connor never knew. That’s where Hutch corrects her. Connor wasn’t involved but he knew.

TK has passed all of his physical test and yet the coach is hesitant about sending him into play. That can’t stop TK though. He hired India away from the clinic, he didn’t want her to go down with it, and he remains set on playing. Sheera doesn’t want him to do it. She even enlists friends to get him to stop. But given the chance TK will play.

So Sheera reveals her true colors. If TK got messed u then that would ruin her five year plan and she won’t be married to Oncho Cinco. Plus she’s mad that TK didn’t take the drug. Finally Tk realized his fiancée doesn’t have a heart and he calls an end to this toxic relationship. He rather be alone than with her.

In the backdrop of all of this former V3 employee Troy has to answer to the Feds for the clinic. It seems V3 newest partner Abby sent the Troy’s recording to them. As it says on the tape there’s nothing that connects anything illegal to Connor only to him. That was before Dani spoke to Hutch. Hutch is willing to turn Connor in.

Before Nico sets up the meeting with Hutch and the Feds, Danni wants to talk to Connor. If only she could. Nico found out that Connor is feeling. As a matter of fact he is but he’s not taking, his side piece, Abby with him. He chose to leave his empire to Abby. For V3 to survive he can’t be connected to it.

Out on the field TK’s former coach at the Hawks is taking out his revenge. He has his guys pummeling TK. So much so Coach Purnell pulls him out of the game. Later when his team is close to winning TK talks coach into letting him back in. He know this could his career but he want to go out with a bang. The Hawks were so intent on getting him that let a touchdown slip right past them.

TK truly injured his shoulder again. His season is over…for now. His love life though seems to have taken off. India is very grateful he saved her from the clinic backlash.

Back to the present Dani shows Connor a vial at the airstrip. That makes him agree to a little chat. She tells how Hutch described his last talk with Connor. The one Connor conveniently forgot to tell anyone about. It’s where he admitted to knowing about the clinic.

Danni doesn’t want money instead she wanted him to get Hutch a second chance at baseball. Connor was surprise but Dani says she’s a therapist not a cop.

Dani returns home to pack for her trip when Nico visits. He the great mysterious Nico revealed some things about himself. His name is Domenic and he’s wants to give her a ride to her vacation. She was expecting a car but he was talking about his jet. Apparently he does have even more secrets than merely national security.

THE END!  See you next season !