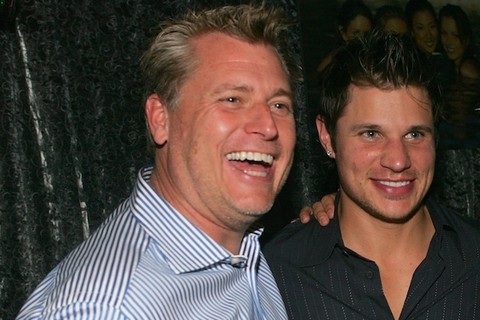 Nick Lachey has waited years to be able to finally comment on former father-in-law, Joe Simpson. If I reach back far enough in my memory I can still see the whole Simpson family on outings with Nick during the Newlywed Show and it always did seem pretty awkward. Even then it was kind of obvious that Nick had an issue with Joe and now years later Nick finally has commented. He and the rest of his recently reunited 98 Degrees boy band stopped by Bravo’s studios to talk to Andy Cohen on Watch What Happens Live.

Host Andy Cohen was asking questions for the guys that he had received via Twitter and one viewer wanted to know what Nick thought was the best part of being away from the Simpson’s. He deadpanned,

“The best thing about not having Joe Simpson anymore as a father-in-law is I don’t have to play grab-ass under the table on Easter Sunday.”

Plain as day, serious as could be and then he just moved on to the next question. According to Radar Online, Jessica Simpson heard about the comment and was extremely upset that her ex would take such a low shot. I guess Jess expected Nick to continue to keep the family secrets but to him, life with Jess was a million years ago. He says that he hasn’t even talked to Jess in about 6 years so clearly she is buried in his past. He joked that dragging out the Newlywed videos wouldn’t be too popular an idea with his current wife, Vanessa Lachey. Instead he keeps it moving and focuses on her and his new son, Camden.

Should Nick have taken such a shot at Joe or should he have continued to stay silent on the topic? Tell us your thoughts in the comments below!