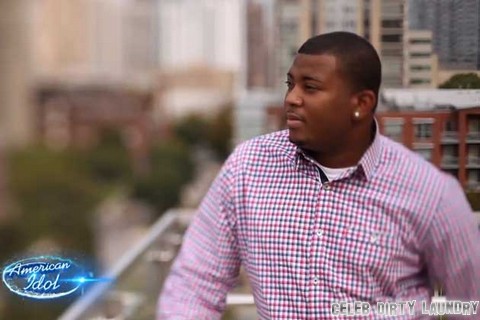 Here we go again! Nicki Minaj nearly flipped out when Curtis Finch Jr. got the boot on American Idol  Top 9 Announced Thursday night. Nicki got up from the judges’ table and walked off mouthing “I’m done.” She didn’t wander far though. She sat her butt back on her chair in time to watch Curtis sing his swan song “I Believe I Can Fly.” But it wasn’t good enough to save him. Curtis didn’t make the cut even though he earned a standing “O” with that same song from judges last week. Bummer. Maybe Nicki can hook him up with a record deal since she seems to be his biggest fan. Before he sang his song, she said “If you go home. I’m going home.” So, there you have it! Nicki is also packing her bags! Um, we’re not buying it. She’ll be back. She’s just a drama queen.

Nicki knows how to work her magic on television to keep American Idol fans coming back for more. That’s why producers pay her the big bucks! Nicki is never shy with her thoughts. She whined to Ryan Seacrest about not having enough time to deliberate with the judges. Guess she was really hoping to talk the other judges into saving Curtis. Sorry Nicki, the vote to save a contestant has to be unanimous! But good luck on trying to get Mariah Carey in your corner!

Now it’s down to nine other contestants competing for the title of “American Idol.” The top three were Candice Glover, Kree Harrison and Angie Miller. Lazaro Arbos came in fourth, Amber Holcomb made it at number five, Janelle Arthur snapped up a spot at number six, Paul Jolley secured it at number seven, Burnell Taylor held on at number eight and Devin Velez made it by the skin of his teeth at number nine. We’ll see who gets a one-way ticket home next week.