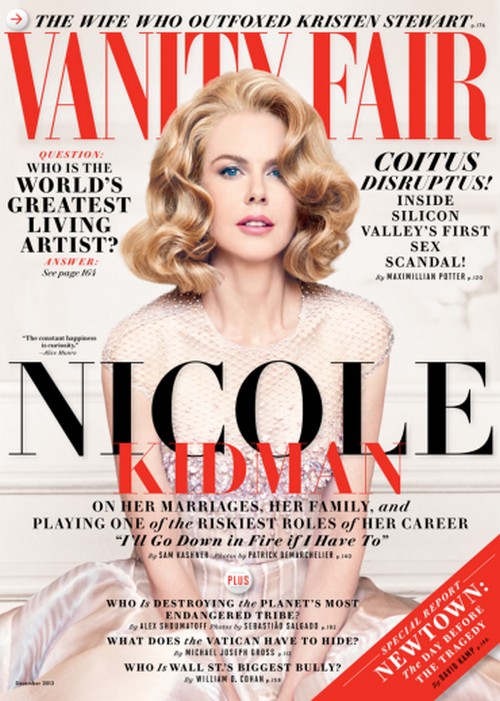 Can you believe that Nicole Kidman and Tom Cruises’ marriage ended well over a decade ago? I guess it really does seem like a long time and both moved on to marry and have children with others’, but still it seems like just yesterday that she was towering over him on the red carpet. Nicole’s interviews have never done much for me because in the past she has come across as pretty cold and disconnected but perhaps chasing those babies has really thawed her a bit. She took the time to sit for a chat with Vanity Fair (I guess she didn’t get Gwyneth Paltrow’s infamous email!) and in it she dises some interesting stuff.

Nicole likens her time with Tom to the kind of relationship that Brad Pitt and Angelina Jolie now share. She says that the attention is crazy and that couples like them will find themselves caught up in their own bubble. As long as they stay focused on each other it’s an intoxicating kind of love. Once the focus begins to drift they’ll realize that it was fun while it lasted but unlikely to be anything permanent. Nicole then speaks of taking time after her split from Tom, to kind of grow up and how she believes that doing that led her to Keith Urban. Nicole believes that her current marriage will last because Keith is her true love.

Do you think that Brad and Angie are in that same kind of bubble with all of the press and attention? Does it pull them together now but are they ultimately bonded by something dysfunctional and temporary just like Nicole and Tom were? Tell us your thoughts in the comments below!