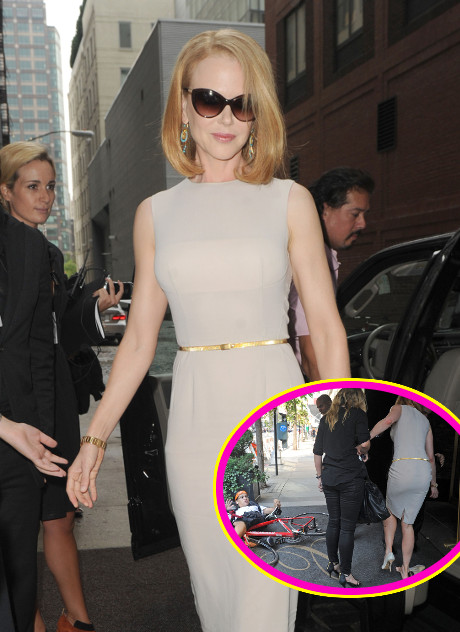 There are two sides to the same coin, just as there two sides to the argument on paparazzi. On the one hand, the paparazzi are sometimes incredibly invasive, violent, gross, and distasteful on their quest to get the money shot. However, the shots end up selling to tabloids and webloids, who cater to the fans of these celebrities, and the fans are the ones who see their movies. So it’s just a vicious cycle that won’t see an end until the cycle is broken – and if the celebrities have anything to say about it, that will be soon.

Nicole Kidman has become the latest celebrity to be embroiled in the celebrities versus paparazzi war. According to reports, Kidman had just left a fashion show during New York fashion week and was on the way back to her hotel when a paparazzi crashed into her on a bike, pushing her to the ground. Even though it was an accident and the pap tried to brake, Kidman reportedly tried to press charges against him. She called the cops – but when the cops got there, Kidman had no ‘visible injuries’ and they refused to arrest the pap on any criminal charges. The cops were reportedly willing to write a ticket for him because he rode a bike on the sidewalk instead of the bike lane – but that’s as much retribution as Nicole is going to get.

So here’s the thing – this pap, named Carl Wu, is notorious for having run-ins with celebrities and getting too close to them on a regular basis. It could be that Nicole recognized him, or just the fact that he was trying to get way too close to her to take pictures – either way, he was pushing his luck. But in the end, as the cops said, an accident is an accident. I doubt Wu was actually trying to push Nicole to the ground, but the fact that he was so close to her is a warning sign. Paps are slowly forgetting even the basic rules of courtesy and civility, and in the end, it will just lead to more court cases and arrests – and they will eventually be put out of business when new laws come into place.