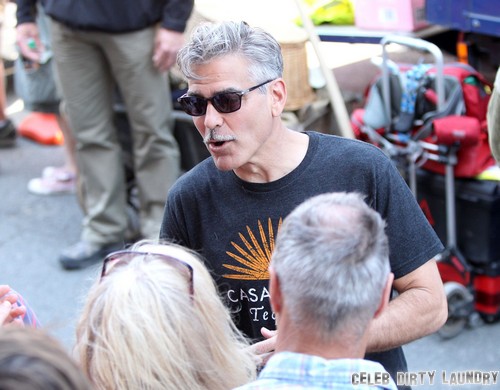 Here we go again. Didn’t I tell you by mid-august there would be a new woman connected in the press with George Clooney? This dude has a pattern. Dump them in June, replace them by August. Anyway, it sounds like commitment phobic actor has gotten tired of just arm candy and has now gravitated towards someone that can carry on a seriously intellectual conversation! According to the Aug. 19th print edition of GLOBE Magazine, George has taken a serious liking to Nicole Pearson, an L.A. Based attorney.

The two were introduced through a mutual friend and really hit it off. George then put a hokey spin on it by having his assistant send Nicole a box of chocolates and quoting lyrics to the old Archies song, Sugar Sugar. Yes, George referred to Nicole as his new candy girl (as in arm candy I’m guessing) – totally dating himself I might add.

So, will Nicole sign on for the job as George’s new red carpet girlfriend, replacing Stacy Keibler? If she’s an attorney then I have to assume that she’s smart enough to know how George rolls. A relationship with him comes with an expiration date of two years max and no matter how charming he may be, it’s not true love. That’s where George’s other half always ends up getting confused. These women always think that they have changed him and that he is going to propose. In actuality, once they start to drop hints about vows George consistently takes 3 steps back. Commitment phobic to the millionth power is what he is.

Will Nicole fall for George or is she smarter than the average chick that we have seen on his arm? Tell us your thoughts in the comments below!