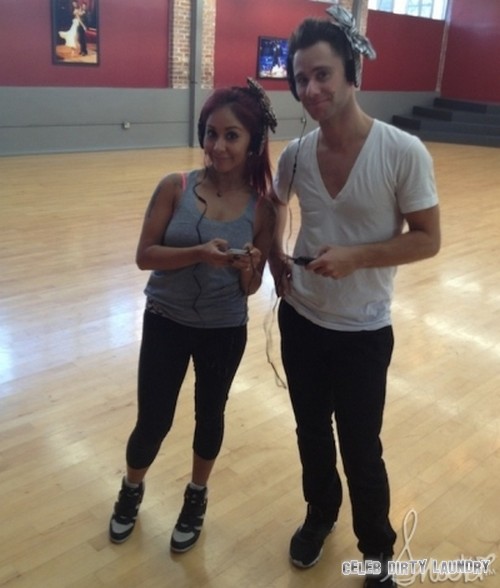 Nicole “Snooki” Polizzi danced a Quick Step, on tonight’s “Hollywood Night” episode of Dancing with the Stars.   To check out Snooki’s DWTS bio [CLICK HERE]  If you missed tonight’s show you can read a full and detailed recap, right here.

On last week’s show Snooki was given a 20/30 for her Rumba routine.  Len had this to say about her Rumba, Len:  “I thought it was very tricky.  It was neat and clear, it came a bit placed and sharped.  It was pretty and nice.”   If you missed any of last week’s performances, you can check out all the videos, right HERE.

Nicole “Snooki” Polizzi and professional dancer Sasha Farber: dancing a Quick Step.  Snooki has been keeping pretty quiet about her dance this week.  She tweeted this about tonight, “Morning!! It’s Hollywood night on #DWTS!! @SashaFarber we’re moving pretty fast tonight and throw in a cute trick!!

Judges comments: Len “This was your first ballroom dance and you have surprised me”. Bruno “You are always on fire, the difference in a week is unbelievable”. Carrie Ann “Tonight what you did out there blew me away, you deserve a star on the walk of fame”.