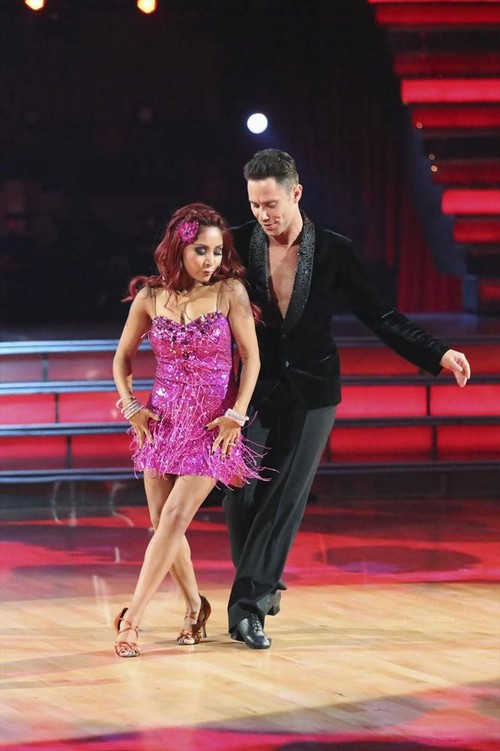 Nicole “Snooki” Polizzi danced a Rumba, on tonight’s Latin-themed episode of Dancing with the Stars.   To check out Snooki’s DWTS bio [CLICK HERE]  If you missed tonight’s show you can read a full and detailed recap, right here.

Tonight the celebs danced either a Samba, Jive, Rumba or Paso.  At the end of the night, one couple will face the first nail-biting elimination. The first elimination is determined by combining the judges’ scores from the first two weeks with the public votes from premiere night.

On last week’s show Snooki was given a 23/30 for her Cha Cha Cha.  If you missed any of last week’s performances, you can check out all the videos, right HERE.

Nicole “Snooki” Polizzi and professional dancer Sasha Farber: dancing a Rumba.  Snooki tweeted the following about practicing for her Rumba this week, “So much dancing today!!! Laying on my ass all night.”

Judges comments:  Carrie Ann: “You made a lot of pretty pictures.  There were not enough emotion or Rumba.  Watch the lifts.” Len:  “I thought it was very tricky.  It was neat and clear, it came a bit placed and sharped.  It was pretty and nice.”  Bruno:  “I believe you have potential.  You have to learn to act and sustain it through.  This is a dance of perpetual motion it does not stop.  Len and Carrie Ann are right.”