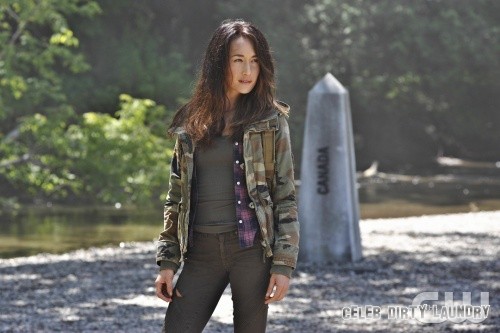 Tonight on CW is the season 4 premiere of NIKITA called, “Wanted.”  If you have never watched the show before When Nikita was a troubled teenager on death row, she was “recruited” by a secret U.S. black ops program known only as Division. They faked her execution and turned her into an assassin. Nikita never lost her humanity, and when she learned that Division was a corrupt organization, she went rogue, exposing their covert operations, destroying their plans, righting their wrongs.

Two years later, she finds herself working for a new Division, fighting alongside a team of allies she’s gathered throughout her adventures. They have vowed to clean up the mess left behind by the old Division – rogue spies, violent assassins – Nikita is hunting down killers just as skilled as she is.

On tonight’s premiere THE FINAL FIGHT BEGINS – Nikita (Maggie Q) is still on the run after she was framed for the assassination of the President of the United States. Dale, a reporter (guest star Todd Grinnell) from the news channel ENN, starts questioning what really happened that night. Nikita sees this as an opportunity to clear her name so she re-enters the country to talk to Dale but walks right into a trap set by Amanda (Melinda Clarke). The team is alerted and Michael (Shane West) sets out to find Nikita before Amanda does. While Birkoff (Aaron Stanford) and Ryan (Noah Bean) help Michael from their new mobile office, a high-tech aircraft, Alex (Lyndsy Fonseca) stakes out a human-trafficking ring and learns The Shop is involved. Things go south and Alex is surprised when Owen/Sam (Devon Sawa) shows up at the scene. Eagle Egilsson directed the episode written by Kristen Reidel (#401).

Nikita “Wanted” airs tonight at 9:00pm ET and we will be  blogging all the details. So don’t forget to come back and refresh your screen often for updates. While you wait for the show – check out the sneak peek video of tonight’s episode below and let us know how happy you are about the return of Nikita.

The season premiere of Nikita opens in a forest, Nikita is running through the woods, with a team of FBI agents and dogs chasing her. She pauses at a tree, and finds a bloody handprint on it, she touches the blood and it is still fresh. Michael appears behind her and says, “Don’t worry we took the hit for you,” before he is shot to death by the FBI agents. Nikita looks around and realizes Ryan, Birkhoff, and Alex have all been fatally shot as well. Then she wakes up…it was all a dream.

It has been 100 days since the assassination of President Spencer, and Nikita is wandering through the woods. FBI agent Matthew Graham announces on national television that they have raised the reword for Nikita to $30 million dollars.

Nikita is switching license plates on cars at a truck-stop, when a cop pulls up and orders her onto the ground, face down. He has ID’d her. The local cops try to cuff her, despite the FBI’s orders to wait for an FBI agent. She is able to overpower the police and escapes in their cop car.

Sonya and Alex are in India fighting against human trafficking, and trying to track down The Shop.

Nikita returns to the country, and appears in the office of an over-zealous reporter named Dale Gordan who has been tracking her story. She wants him to interview her.

Meanwhile the truck-stop where Nikita stole a cop car is swarming with FBI agents, and Michael. He is posing as an agent, and snooping around their evidence. He is taking photos of everything they have on Nikita. Michael and the team are trying to track her down before the FBI does. They get enough information from the FBI’s evidence to realize she is headed to see Dale Gordan.

Nikita reveals to Gordan that the President shot herself, and committed suicide. She says that the President, and two of her secret service men were acting out of character. She thinks that somebody poisoned them to cause them to act strangely the day of the suicide. Gordan reveals someone has anonymously been texting him information on her, and Nikita realizes it is a trap. She was set up. Someone knew that if they kept feeding Gordan information and he aired it on the news, that Nikita would pay him a visit. And, she did. Several cop cars surround Gordan’s office building. Amanda is responsible for the set-up.

Sonya and Alex are still in India running surveillance on The Shop.

Gordan’s office is surrounded by FBI agents. Gordan tries to help her escape, but a secretary realizes who she is and blows her cover as a cable guy. Nikita takes Gordan hostage, and uses him as a cover to get to the roof of the office building without being taken down by the FBI. Nikita receives a call from Michael and is shocked to hear from him. She didn’t want her team involved in this mess, but they aren’t going to leave her high and dry. Nikita puts Gordan into a room, and leaves him with a note and a phone, and orders him to give them to the FBI when they find him. With the assistance of Burkhoff, she is able to stage a phone call from the roof, but she is no longer on the roof.

While Nikita makes her way through the vents, Birkhoff lectures her on the phone about abandoning her team, and reveals that since she left Michael has been searching for her. She asks him to hack into the HVAC computer system of the building and turn off the fans so she can get the rest of the way through the vent. The FBI has realized someone is helping Nikita, and locked Birkhoff out of the computer system. Nikita is trapped in the vents, and the FBI is inside the building.

Alex experiences some difficulties in India, and they catch her watching them during a human trafficking sale. She is forced to take down about ten Indians, and blows her cover. Amanda gets news of what happened and is irate, it was her men that were trying to make the purchase.

Seeing as how Nikita is trapped in the building, Michael takes matters into his own hands. He is blackmailing Matthew Graham (FBI), with a photo of his wife. Convinced that Michael’s crew has his wife (which they don’t, Michael is bluffing), Graham helps Nikita escape from the building.

Alex has realized that she crashed more than just a human trafficking sale. There was something special about the four men that were being sold, they had microchips in them.

Graham gets Nikita through the FBI barricade, and then Nikita kicks him out of the car. As she is pulling away he pulls out a gun he had hidden, and fires at her. Nikita pulls away, but she is hit.

Alex sends photos of the microchips to Ryan and Birkhoff. Ryan is excited, he thinks she has found the missing link. Owen/Sam is in India. He has been watching Alex. He pulls a gun on her.

Nikita is wounded badly, and can’t drive. She crashes the SUV she was driving into two parked cars and crawls out.

Graham has returned to the office. He pays Dale Gordon a visit, and Gordon gives him the blood test and phone that Nikita left for him. Then there is a huge explosion. Nikita’s team watches in shock, they aren’t responsible for it. Matthew Graham walks away unharmed, but Gordon is dead, he calls The Shop and tells them that Gordon is no longer an issue. (FBI Agent Graham is working for The Shop!)

Nikita is badly wounded and stumbling down the dark street. She passes by a bar with a television, and the news is on. They are blaming Nikita for the explosion, she is now on the run for killing the President, a dozen FBI agents, and Dale Gordan.