Ian Somerhalder and Nina Dobrev Back In Touch After Split 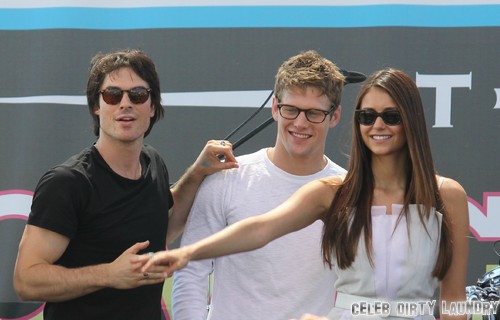 It’s been a couple of months since Nina Dobrev and Ian Somerhalder broke up, and they’ve been apart ever since then. Nina has been working on a movie called Let’s Be Cops, and Ian’s been in London shooting The Anomaly with Noel Clarke and Luke Hemsworth.

However, with the Vampire Diaries about to resume shooting later this month, it was about time the former couple started talking again. They did run into each other once after their breakup – during the CW upfronts – but all sources said that it was awkward and uncomfortable, despite reports stating that the two wouldn’t let their split affect their professional life. Of course, all actors who work together and break up always, always say that their work will not be affected by their personal life – and almost always, they are wrong.

This might be one exception where they are actually right. While Nina’s and Ian’s breakup didn’t exactly seem ‘amicable’, sources say that both of them are back in touch after several months spent apart. Calm down Vampire Diaries fans – this doesn’t mean that they are getting back together. It just means that they are doing everything possible to keep things as least awkward as possible.

Obviously, they will be reunited on set once the cast and crew returns to Atlanta to resume shooting the fourth season of the show. There’s also the added factor that Nina and Ian’s characters are romantically involved on the show right now, which means things would be doubly awkward for them if they weren’t talking in real life.

What do you guys think about Nina and Ian keeping in touch before they reunite on the set of the Vampire Diaries later this month? Do you think that they will get back together, or they will just stay friends? Let us know in the comments.