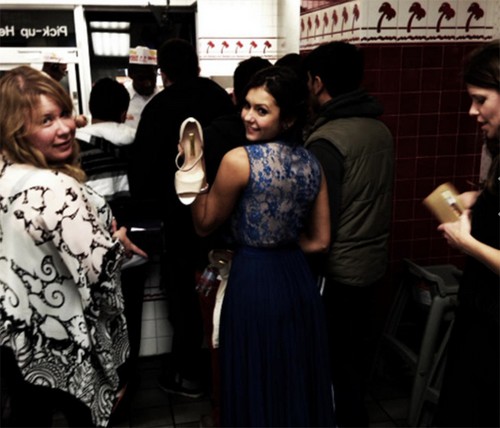 Nina Dobrev, and the Vampire Diaries showrunners, Julie Plec and Kevin Williamson, were all spotted getting their late night munchies on. After the Trevor Live benefit on Sunday night at the Hollywood Palladium, Nina, Julie, and Kevin all stopped by for a late-night pit stop at In-N-Out Burger.

In-N-Out is pretty much the most popular fast food destination for anyone jonesing for some late night grub in Los Angeles, and it looks like Nina, Julie, and Kevin are just like everyone else. In fact, they seemed to eager to get their food that they didn’t even change out of their late night formal wear. Hmm… could somebody be having the munchies?

Nina shared photos of herself in the gown, ordering food at the popular joint. She captioned the photo, “Junkies. Getting our fix. @julieplec @carolinedries @kevwilliamson. I couldn’t help it. I had to … gown or not.”

Nina is at the center of some more speculation lately over the status of her relationship with Ian Somerhalder. Although the couple broke up earlier this year, there have been plenty of rumors suggesting that they have gotten back together in the past two months. They’ve certainly been spotted together often enough, and it really does seem like our favorite on-screen vampire couple is back together in real life. Either that, or they’re just VERY good friends.

What do you guys think? Could Nina and Ian be back together? And do you think it’s tacky or charming to show up at a fast food restaurant in evening wear? Let us know what you think in the comments. 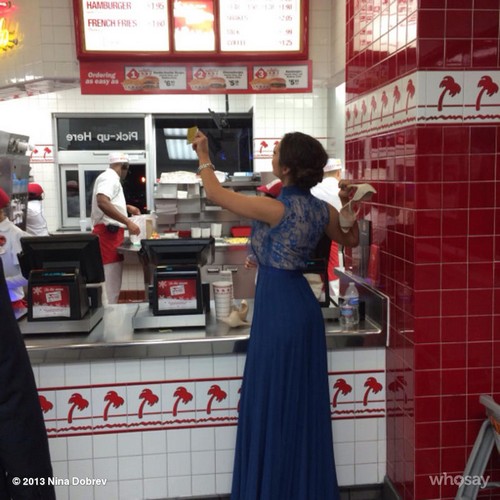