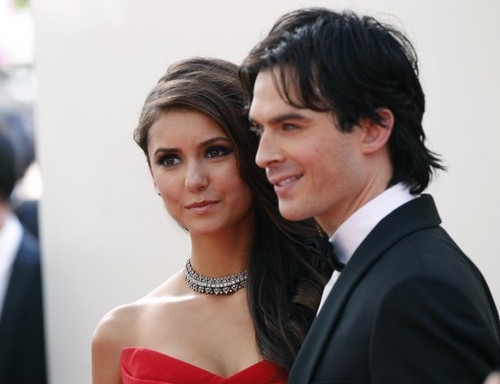 Are Nina Dobrev and Ian Somerhalder getting back together after a year of being broken up? The couple originally separated at the beginning of 2013, although they never gave any official reasons and claimed that they remained ‘amicable’. Since that’s what most celebrities say in the wake of splits, not many people took it seriously. Instead, Vampire Diaries fans stuck to their hope that the real-life counterpart of fan favorite couple Elena and Damon would get back together. And alas, their hopes were dashed when Nina started dating Derek Hough, brother of Nina’s best friend Julianne Hough and best known for his work on Dancing with the Stars.

One could argue that Nina could have done a lot better, but I don’t think she’s so superficial that she would refuse to date someone just because they appear on a reality show. However, Nina and Derek also ended up breaking up relatively soon. One minute, they were happily in ‘love’ and posing for the cameras, and the next minute, they were done. Who knows how this has affected Nina’s friendship with Julianne, but sources claim that the cause of Nina’s breakup with Derek was because she was still in a friends with benefits relationship with Ian.

And now, E! Online is reporting that Nina and Ian are getting ‘hot and heavy‘ once more, more than 10 months after they officially announced their first split. This isn’t a surprise – most celebrity couples, especially ones that have dated for years, often tend to get back together after breaking up temporarily. When real people break up, they get the distance to gain some perspective and stay apart. With Nina and Ian, they’re actors that see each other every day and have to pretend to be in love for most of that time. Is it hard to see that despite whatever issues they have, their acting was once again bleeding into their real life? Of course, this kind of on-again/off-again relationship isn’t sustainable, especially if they don’t want their work to suffer. In the end, I think they’re either going to end up getting engaged or breaking up completely.

What do you guys think about Nina and Ian getting back together? Do you think Derek feels like a fool? Let us know your thoughts in the comments.