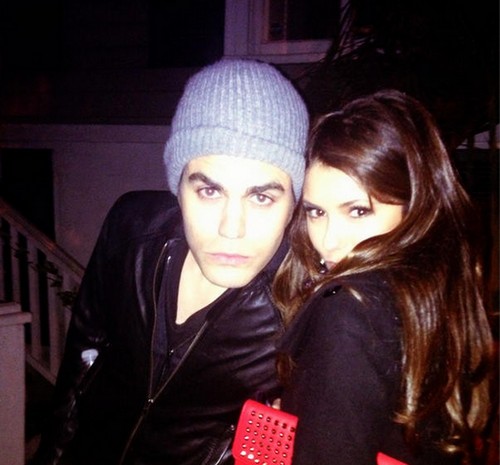 It’s been several months since Nina Dobrev and Ian Somerhalder broke up, and although she was dating Derek Hough for a hot second, it seems like she’s still not completely over her former boyfriend of three years. After all, she couldn’t make the relationship with Derek last, despite the fact that he was head over heels in love with her. It’s still not clear why Nina and Ian ended things after staying together for so long, but I wouldn’t be surprised if they were still friends with benefits!

For example, Nina has been filling her Twitter feed with pictures of herself with hot guys. One is with her Vampire Diaries co-star Paul Wesley [who is newly single], and both of them show her looking very happy and very close with both dudes. Is she trying to send a message to Ian? Nina’s got tons of friends in the industry, and many of them are extremely good looking actors. I don’t necessarily think she’s setting out to hurt Ian, but I’m sure she wouldn’t mind making him a little jealous. After all, if the rumors are true and Ian cheated on Nina, then she would have a good reason for teasing him and trying to make him feel bad.

Then again, maybe they ended things on good terms and she’s just posing with a bunch of cute guy friends, no ifs and buts. And even if she’s not trying to make Ian jealous, she could very easily be trying to tease her latest ex-boyfriend, Derek Hough. They did break up very recently, and even though they only dated for what seems like two minutes, she might be trying to send a message to the public that she’s doing just fine.

All this speculation aside the most likely reason that Nina is posting these photos is simply to show how good she looks!  Of course she wants to get Ian to step up and formally commit to a relationship with her.  She never got over the TVD stud and what she really wants is to be his GF for all the world to see.