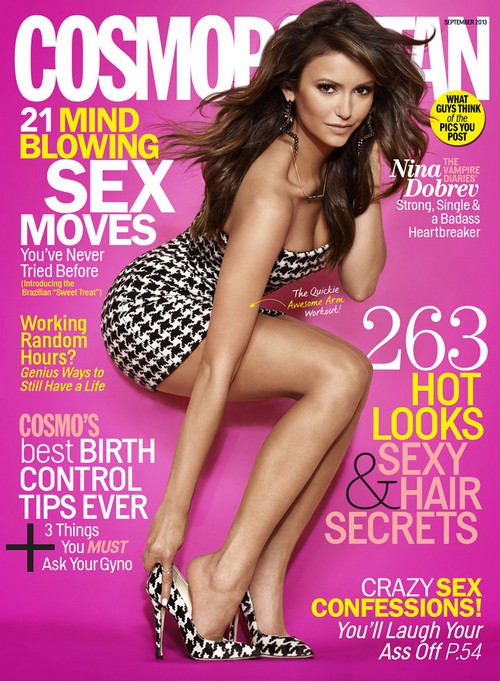 Nina Dobrev and Ian Somerhalder broke up several months ago, but Nina’s finally opening up about the topic in a new interview with Cosmopolitan Magazine.

Nina covers the latest issue of Cosmo, and as such, does discuss her private life, albeit briefly. While she won’t mention Ian by name or say anything outwardly rude, she does touch upon the topic of her breakup. When asked whether she’s become closer to Julianne Hough following both of their well publicized breakups to their respective partners, Nina’s reply is, “That’s not what our friendship is about. Unfortunately, that’s how it’s perceived, but there’s more to us.”

Either way, she also discusses her ideal man, and there may have been a slight barb against Ian in there. She says, “You either have chemistry or you don’t, but a lot of what attracts me is a guy’s mind and humor and talent. I need to get to know all those things before I fall for someone. I’m not a one-night-stand kind of girl.” Could the one night stand comment be referring to the rumors of Ian cheating on her? After all, there were plenty of rumors that stated that cheating was what led to their breakup, although nothing’s been confirmed or denied at this point. While things definitely remain awkward on the set of The Vampire Diaries, Nina and Ian are trying to remain quiet about their breakup, and public interest is slowly waning.