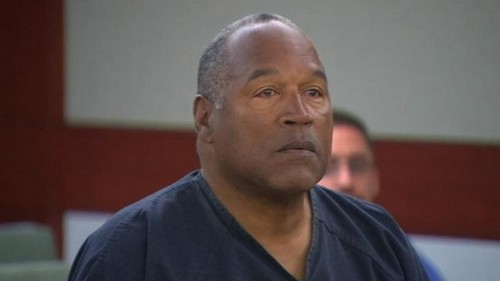 OJ Simpson may have spent the last four years locked up in a cell, but don’t make the mistake of thinking that women still aren’t angling for his attention! At least that’s what he wants us all to believe. As the aging former football star headed into court this week we can all see that prison has left him bloated and looking much older, but he is still living well – or as well as one can behind bars.  In fact we might just be seeing a jailhouse wedding for the murderer!

According to the May 27th print edition of National Enquirer, OJ’s cell is a popular hangout because he has television, tons of books and he is weighted down with loads of junk food. His own kids may not want anything to do with him but apparently he has a string of desperate chicks that are in constant contact with him. Most of them send him money for the commissary and according to fellow inmates OJ has spent upwards of 3 grand a month on junk food thanks to his groupies.

Food isn’t all that OJ gets either. Panties and dirty selfies have made it through the prison screening process and into OJ’s hands. He claims to have several women begging him to stay with them if he is lucky enough to be granted a new trial and released on bail. The deluded prisoner thinks that he’s a total sex bomb and believes that if he can get that release then he can go on some sort of tour and will have women all over the country waiting to see him.  Maybe one lucky dame will get to marry OJ in prison – won’t that make her parents proud.

I know that there are women out there that do gravitate towards guys like OJ and they think nothing of starting a relationship with a complete stranger behind bars but I just don’t get it. Why does this probable killer who is jailed look more appealing than a decent non-criminal on the outside? Will OJ get that new trial or are all these chicks going to be waiting a long time? Tell us your thoughts in the comments below!