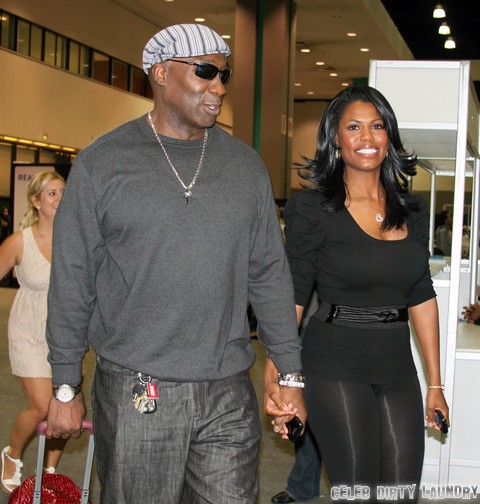 Omarosa Manigault is suing La Toya Jackson for ‘false, vicious, and defamatory statements’ made about her on national television. When La Toya was fired by Donald Trump on Sunday’s episode of ‘All Star Celebrity Apprentice’, she raged against Omarosa, saying, “She’s a conniving, scheming, cut-throat, probably pulled the cord on Michael Duncan Clarke … and I thought Mr. Trump was falling for that fake cry. Such a lie!”

Michael Clarke Duncan was the victim of a tragic heart attack, so it’s obviously considered a lawsuit in waiting when someone accuses his wife of murder, regardless of their intention. As such, Omarosa’s lawyer has gone on the record, stating, “La Toya Jackson’s statement on the March 17, 2013 episode of All-Star Celebrity Apprentice, that the Reverend Omarosa Manigault caused her fiancé Michael Clarke Duncan to die, is false, vicious and defamatory.Rev. Manigault has been heralded as a life saver for her actions on the evening that her fiancé suffered a life-ending heart attack.”

Her lawyer added, “Mr. Duncan passed away from natural causes. Ms. Jackson made the statement immediately after having been “fired” off the show, and blames Rev. Manigault for her loss. It is repulsive and of the lowest level of class for Ms. Jackson, who showed herself to be a “sore loser” in making these disgusting statements in the wake of Rev. Manigault’s tragic loss.”

Uh, of course La Toya is a sore loser! I think we’ve seen enough from her in the past couple of years, especially following the whole drama surrounding Michael Jackson’s estate, to know that she is a conniving and twisted piece of work. Unfortunately, the best way to fight La Toya isn’t to go all out in a lawsuit, especially because the lawsuit will end up bringing more publicity to this case and La Toya’s words instead of making them go away. However, I do have to say that calling someone a ‘sore loser’ in a lawsuit negates the whole point of pursuing the lawsuit in the first place. You don’t call people names when you’re trying to fight against name-calling. It’s like first grade all over again, except instead of two ten years old fighting in the playground, it’s two fully grown women fighting on national television. Oh, the perils of reality TV.