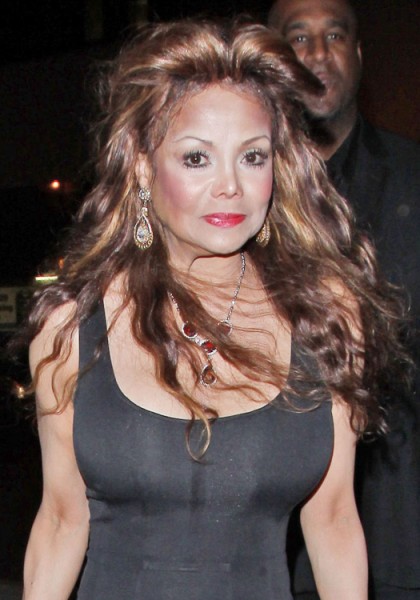 Did sticky fingers La Toya Jackson loot from Michael Jackson’s house after he died? Vanity Fair seems to think so. I thought those Jackson men were crazy pants but these Jackson women are giving them a run for Michael’s money!

Oh but not so fast says La Toya! According to TMZ, Michael’s sister is threatening to sue the magazine over allegations that she went to Michael’s Carolwood mansion shortly after his death and loaded plastic bags filled with cash into a duffel bag. La Toya is asking for a retraction because she thinks “the article describes her visit as a ‘mad scramble for money’ — strongly insinuating she stole large sums of cash from MJ’s house.”

That’s exactly what the story’s insinuating La Toya! And if I threw a boulder in the middle of Times Square I wouldn’t be able to hit someone who doesn’t believe it. The Vanity Fair except comes from the upcoming Michael Jackson biography written by author Randall Sullivan and currently titled Untouchable: The Strange Life and Tragic Death of Michael Jackson.

It states: “Grace Rwaramba [former nanny to MJ’s kids] described Michael’s standard practice of hiding his cash in black plastic garbage bags and under the carpets. [The security guard] describes seeing La Toya and her boyfriend loading black plastic garbage bags into duffel bags and placing them in the garage. (La Toya would insist that nearly all of Michael’s money was gone by the time she arrived at the Holmby Hills house).”

So is La Toya saying she tried to steal money but nothing was there by the time she got there? Is that supposed to be any better? Oh you Jacksons! The skeletons never stay long in your closets. It was Janet Jackson last week and now it’s La Toya’s turn. Janet is threatening to sue over allegations from the same story that she delayed Michael’s official burial for three months until she got reimbursed for fronting the cash.

I know Janet’s always got off easy as the sane Jackson but after recent events I’m beginning to think otherwise. If I believe La Toya acted the fool over the money I have to assume Janet did the same. I know deaths bring out the worst in people but this is ridiculous! I’m super excited to read that story. If I know the Jacksons, these allegations are just the tip of the iceberg!

Do you think La Toya will sue or is she just bluffing? Do you believe La Toya stole from Michael?