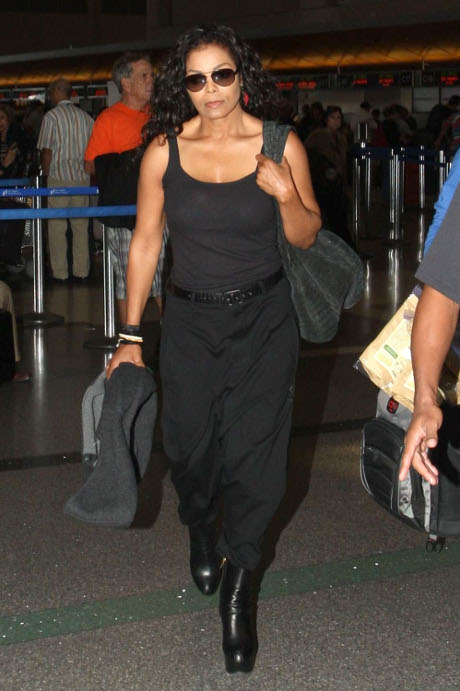 Janet Jackson has been making the news lately, particularly in regards to her somewhat mysterious relationship with Wissam al Mana, but now the singer is garnering a different type of attention after a soon-to-be released biography on the King of Pop is claiming that she delayed Michael Jackson‘s funeral over a money battle with the cemetery in which he was supposed to be buried. The new biography of Michael’s life, which was written by author Randall Sullivan and currently titled Untouchable: The Strange Life and Tragic Death of Michael Jackson, hasn’t been released yet but Vanity Fair supposedly obtained an excerpt.

According to Vanity Fair, “Janet put up the $40,000 deposit at Forest Lawn to secure a spot for Michael but refused to let the funeral take place until the money was repaid.”

The little dispute caused Michael’s official burial to be postponed for nearly 3 months, and the shocking tell-all book goes on to say that Michael’s other sister, LaToya Jackson, was involved in some shady business as well following the pop star’s death. According to reportings, LaToya invaded Michael’s Holmby Hills rental mansion and came out carrying black trash bags loaded with cash!

“Grace Rwaramba [former nanny to MJ’s kids] described Michael’s standard practice of hiding his cash in black plastic garbage bags and under the carpets. [The security guard] describes seeing La Toya and her boyfriend loading black plastic garbage bags into duffel bags and placing them in the garage. (La Toya would insist that nearly all of Michael’s money was gone by the time she arrived at the Holmby Hills house).”

Apparently, the following morning, Janet arrived at the house with a moving truck to help move out Michael’s things. But her family — her sisters and Katherine Jackson — gave her the cold shoulder. The van was seen exiting the mansion’s driveway not long after that interaction. “They camped out for most of a week, leaving and returning whenever they felt like it,” says Sullivan.

What do you think about all this Jackson Family drama? Do you think the world will ever stop talking about the Michael Jackson death and all the mysterious drama surrounding the unfortunate accident?