BY Amanda Austin on November 14, 2013 | Comments: 4 comments
Related : Once Upon A Time In Wonderland, Recap, Television 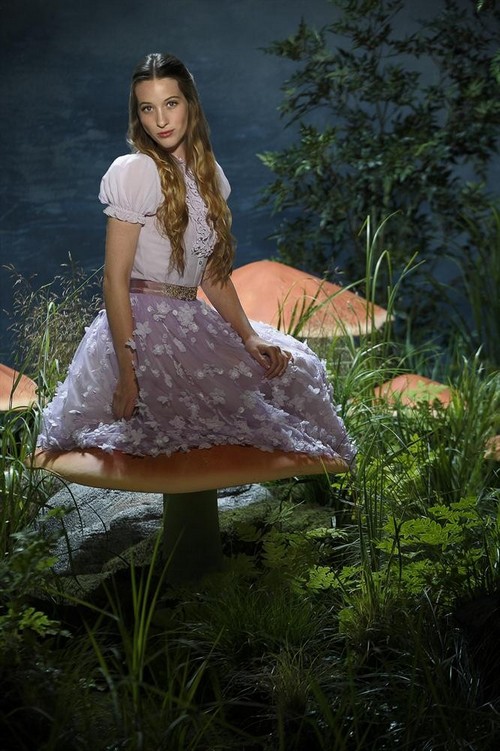 Tonight on ABC their new fantastical, epic adventure ONCE UPON A TIME IN WONDERLAND continues with a new episode called, “Heart of Stone.”  On tonight’s show  Will Scarlet and Anastasia jump through the looking glass in search of a new life that leads to an altering decision.  Did you watch last week’s episode?  We did and we recapped it right here for you.

On last week’s episode when the Knave’s life is in danger, Alice has to make the tough decision on whether to use one of her three precious wishes and what that would mean for her and Cyrus. Her new friendship with Lizard reveals some of the Knave’s backstory and Cyrus plots to escape. Meanwhile, Jafar’s plan to kill the Knave puts the Red Queen in a difficult position as she grapples with her feelings for him and her desire to get what she wants. In flashback, we explore Jafar’s origins and find out what he truly wants from Cyrus.

On tonight’s episode In a flashback, Will Scarlet and Anastasia jump through the looking glass to enter Wonderland against her mother’s wishes? They both soon realize that life in Wonderland isn’t exactly what they had both imagined. Meanwhile, in current Wonderland, we find out how the Red Queen ascended to royalty status.

Tonight’s new series is going to be exciting, and you won’t want to miss it. So be sure to tune in for our live coverage of  Once Upon A Time in Wonderland episode 5 — tonight at 8PM EST! While you wait for our recap, hit the comments and let us know how your excited you are about the new series.

Tonight’s episode of Once Upon A Time In Wonderland opens with a flashback of the Queen of Hearts, Anastasia’s mother telling her that Will, AKA Knave of Hearts, is not marriage material. She walks out on her mother, and leaves to start a life with Will.

Alice is looking after Will’s statue. She leaves him with a blanket to fend off the weather and vows to “get him out of this.” The Queen of Hearts interrupts Alice and Statue Will’s touching moment. She offers Alice a deal, if she helps her get rid of Jafar, she will help her find Cyrus. She wants to send Alice on a suicide mission for some magic dust that will help her get rid of Jafar.

Cyrus has made a new friend in Jafar’s dungeon. The mysterious man says that he is being held captive because he also has something that Jafar wants. Cyrus tells him they won’t be held captive much longer, he seems to think they will be getting free today.

The Queen is reminiscing about her life with Will. They are clearly young and in love. The pair is struggling to find berries in the forest in Wonderland. The Queen is unhappy in the woods, she wants to go to the palace because she has heard it is wonderful.

Alice and The Queen are riding in a carriage together, Alice has agreed to her deal, and they are on the way to get the magic dust.

Cyrus and his new friend are planning an escape from Jafar’s dungeon. Cyrus has gotten the bottom off his cage, now he just has to find his way out of the dungeon.

Rabbit is paying Jafar a visit. Jafar offers to help Rabbit with his debt to the Queen, in exchange for information about Alice.

Syrus has made a heroic escape from the hanging cage he was held captive in. Now he just needs to find his way out of Jafar’s dungeon.

The Queen has lead Alice to a cliff, she has to cross a huge ravine to get to the magic dust. It is impossible for anyone to make the jump and live. But, there is a tiny sign that states “Only The Purest Of Heart Shall Make The Leap.” The Queen believes that Alice’s heart is pure, and she will be able to magically jump across the ravine, unharmed. However, if her heart isn’t pure, when she jumps she will fall to her death.

The Queen shares another flashback, the first time she ever stepped foot into the Wonderland Palace, and it is a formal ball. She meets the King and is obviously smitten with him, despite the fact that Will brought her there. The King’s guards arrive at the ball and drag away The Queen and Will, they accuse them of being imposters, and robbing someone’s carriage, they throw them out of the Palace.

Alice is still contemplating leaping off the cliff, she is not sure that her love for Cyrus is strong enough to carry her to the other side. She takes a step off the cliff, and miraculously doesn’t fall. She is basically walking on air, her faith is carrying her. After a few more feet, she suddenly drops, and disappears into the ravine.

The Queen stands at the edge of the cliff dumfounded that Alice failed and fell. She has another flashback, her and Will are arguing about returning home. She is unhappy in Wonderland. She has a plan, she wants Will to help her steal the King’s crowned jewels, and transport them back home.

Cyrus is free, but being the good person he is, he won’t leave the other prisoner. The prisoner won’t let him free him though, he doesn’t want to slow Cyrus down. He remains in the cage, and Cyrus embarks on his great escape.

Jafar is torturing Rabbit to get information about Alice. He rips off one of Rabbit’s feet as leverage, and Rabbit begins to talk.

The Queen has another flashback, she is remembering stealing the crowned jewels from the palace when she was still a peasant. The King catches her.

Back to reality, The Queen is breaking her promise to Alice. She snatches the magic dust from Alice’s hand, and refuses to hold up her end of the deal and tell her where Cyrus is. Unbeknownst to The Queen, she doesn’t have all of the magic powder, Alice kept some for herself.

Rabbit is trying to escape from Jafar, and he runs into Cyrus who is also trying to do the same. Rabbit takes one for the team and lets Jafar catch him, so Cyrus can get away. Jafar makes Rabbit dig a hole, they are heading back to our world to capture someone Alice supposedly cares about.

Back to The Queen’s flashback, the King isn’t going to have her arrested for stealing his jewels, he has decided she is fit to be his queen. He asks her for her hand in marriage, and places the Queen’s Crown on her head. He is impressed with her “drive to be more than she is.” She decidedes that love is not enough, and abandons Will to become the Queen. He is standing outside the palace waiting for her to return with the diamonds, and instead the King comes out of the palace announces he has a new Queen, Will looks on heartbroken.

Back to present Wonderland, apparently the Queen does have a heart. She sprinkles some of her magic dust on Will’s statue and brings him back to life. Then she disappears around the corner before he can see who freed him from the stone.

Cyrus gets out of Jafar’s dungeon only to find that he is on top of a cliff, miles away from Wonderland, up in the clouds, and his escape is going to be much more difficult than he imagined.