BY Kristine Francis on November 7, 2013 | Comments: 2 comments
Related : Once Upon A Time In Wonderland, Recap, Television 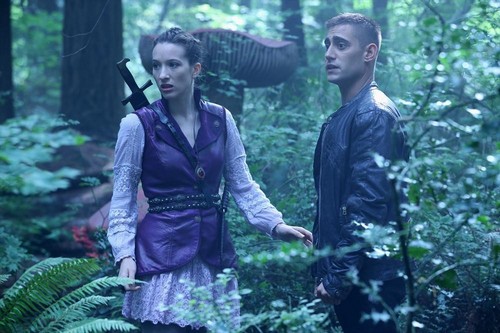 Tonight on ABC their new fantastical, epic adventure ONCE UPON A TIME IN WONDERLAND continues with a new episode called, “The Serpent.”  On tonight’s show  how far is Jafar willing to go to get what he truly wants and what will it take for Alice to stop him?  Did you watch last week’s episode?  We did and we recapped it right here for you.

On last week’s episode in a flashback, viewers were introduced to Will Scarlet, who turned out to be the nifty Knave of Hearts. Will had joined Robin Hood’s Merry Men and convinced them to steal gold from Maleficent’s castle before also pilfering an enchanted looking glass for himself that comes with a hefty consequence. Meanwhile in Wonderland, Cyrus successfully tricked Jafar and the Red Queen into sending a Bandersnatch after Alice who in turn exposes something the White Rabbit had been secretly hiding.

On tonight’s show when the Knave’s life is in danger, Alice has to make the tough decision on whether to use one of her three precious wishes and what that would mean for her and Cyrus. Her new friendship with Lizard reveals some of the Knave’s backstory and Cyrus plots to escape. Meanwhile, Jafar’s plan to kill the Knave puts the Red Queen in a difficult position as she grapples with her feelings for him and her desire to get what she wants. In flashback, we explore Jafar’s origins and find out what he truly wants from Cyrus.

Tonight’s new series is going to be exciting, and you won’t want to miss it. So be sure to tune in for our live coverage of  Once Upon A Time in Wonderland episode 4 — tonight at 8PM EST! While you wait for our recap, hit the comments and let us know how your excited you are about the new series.

In the land of Agrabaar, there loved a boy. He was maltreated most of his young life until he saw a great beauty one day at the market. Although everyone else turned away, he did not. Instead he followed her. He knew she had magic and he wanted to learn from her. He wanted to learn the dark arts in order to get revenge. He wanted to destroy the sultan because he the sultan’s illegitimate son. Hearing his story the beautiful witch took him intent on teaching him magic. The young boy’s name was Jafaar.

Back in the present, Jafaar wants answers from the Queen. For instance he can’t understand why she brought Knave along with Alice back to Wonderland. Surely she didn’t need to bring the young man as well. When she tells him that Knave is inconsequential then he comes up with a plan. A way to rid themselves of Knave.

Alice and Knave were almost caught by the bounty hunters. In order to protect Alice, Knave leads the men away from her location. However he thought he was a faster runner than he was. He was about to be captured when he got rescued. Not by Alice though. He was rescued by the Queen, his former love. She may have saved home from death but that doesn’t stop her from imprisoning him.

It some years before the witch taught Jafaar all she knew. He only had anger at his father but she taught him to discount human life.

Alice wants to go rescue Knave and yet she can’t do it alone. Luckily she runs into someone Knave owes and after all dead men can’t pay debts. Alice and Lizard head to the Queen’s together in order to save Knave.

Jafaar confront the Queen. He wants to know why Kanve wasn’t killed immediately. She can come up with all the excuses she wants but he wants the man dead. He also wants a bit of a spectacle. Knave will have a public execution. It’s time for the Queen to start acting like one instead of like the girl that stole a crown.

Cyrus almost freed himself but he was caught turning a wishbone into a pick pocket.

The Queen/ Anastasia tries in one last bid to keep Knave alive and he refuses. He doesn’t want her saving him out of pity. He dares her to kill him knowing that her telling she couldn’t do it, she would. Lizard had told Alice that Knave was messed up after the whole Anastasia situation. He had become self-destructive, Well, all it took was her presence and all he wanted was to die.

Alice and Lizard show up in time for the executioner to practice on watermelons. Lizard wants to stop it just as much as Alice. She was more than a person he owed. She was friends with Knave. Never anything more. He kind of rescued her and helped her out afterwards.

Cyrus isn’t the first genie Jafaar captured. He and his lady friend searched the world over for genies and sometimes killed their masters. The last part more out spite than necessity.

Quick thinking allowed Alice to save Knave. Now all they have to do is try to escape the maze. Much harder than they thought. Jafaar and the Queen corner the trio in the maze. Jafaar gets rid of Lizard and tortures Knave into getting a wish out of Alice. She does use a wish. She wishes that if anyone she cares for dies then so does she. He can’t kill anyone and he can’t torture Alice for wants he wants but Jafaar can make her hurt all the same. He turns Knave into stone.

Jafaar leaves the Queen and Alice to themselves. Alice had heard Knave call the Queen by her name and so she pleads with the Queen to help him but she won’t.

Jafaar had learned all he needed from his former teacher. Getting the genie though didn’t require her help. She taught him to kill whoever was in his way and so he did. He didn’t kill he. He changed her into his staff thereby allowing him to collect all the power by his lonesome.

Cyrus make still be able to make his escape. His wishbone had magic in it.