BY Kristine Francis on October 24, 2013 | Comments: 2 comments
Related : Once Upon A Time, Recap, Television 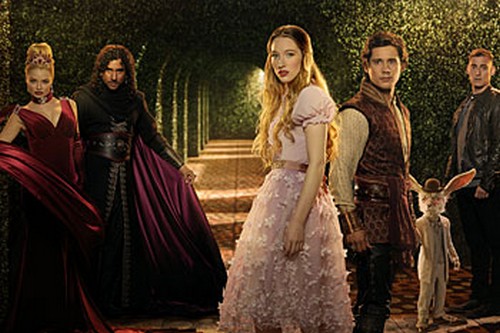 Tonight on ABC their new fantastical, epic adventure ONCE UPON A TIME IN WONDERLAND continues with a new episode called, “Forget Me Not.”  On tonight’s show  The knave’s past is revealed and Cyrus successfully tricks Jafar and teh Red Queen which consequently reveals the White rabbit’s deception.  Did you watch last week’s episode?  We did and we recapped it right here for you.

On last week’s episode in Wonderland, Alice concocted a plan to find Cyrus and used his genie bottle as bait to find out who she’s up against and who her real friends are. Meanwhile, the Red Queen and Jafar faced off and in flashback, viewers found out how Alice and Cyrus fell in love and how Cyrus ended up in Wonderland.

On tonight’s show in a flashback, viewers are introduced to Will Scarlet, who turns out to be the nifty Knave of Hearts. Will has joined Robin Hood’s Merry Men and convinces them to steal gold from Maleficent’s castle before also pilfering an enchanted looking glass for himself that comes with a hefty consequence. Meanwhile in Wonderland, Cyrus successfully tricks Jafar and the Red Queen into sending a Bandersnatch after Alice who in turn exposes something the White Rabbit has been secretly hiding.

Tonight’s new series is going to be exciting, and you won’t want to miss it. So be sure to tune in for our live coverage of  Once Upon A Time in Wonderland episode 3 — tonight at 8PM EST! While you wait for our recap, hit the comments and let us know how your excited you are about the new series.

Long ago in the enchanted forest, there lived the Merry Men. They stole from the rich and gave to the needy which sometimes meant themselves. One of the merry men turns out to be no other than the Knave of Hearts.

It’s because of thieving past that not a lot of people like Knave in Wonderland. So much so he thought he might be hurting Alice’s chances. Yet there he is wrong. Alice says it herself. Someone stole Cyrus’ bottle and a thief is just what she needs. There was only two people that knew where the bottle was. She’s going to need all the help she can get in order to steak back.

Although she views him as a friend and hero, he won’t allow that for long. After all he has a seedy past. Perhaps more than the wanted posters let on. He needs to take her to the Underland. The underground black market that runs throughout Wonderland. They need to see the caterpillar.

He’s willing to offer his services but at a price. They have to get something valuable for him first. While they deal with a very sinister caterpillar, Cyrus is forced to endure the company of the Red Queen and Jafaar. They know Alice is coming for him, her letter got intercepted, and they can’t wait to set a trap.

Knave went by another name in the Enchanted Forrest. He was called Will. Will used to be part of the Merry Men not for gain. That was there creed but Will allowed himself to get greedy or better yet at least appear that way. He went after the magical creature Maleficent. He had heard she was wealthy and what better way to give back. That is the story he sold to Robin Hood.
Still there was one more motive to why he was willing to face a magical dragon. It was for a woman. A very sleepy and tired woman.

Now he’s in the similar position of facing danger in order to help a woman. He may claim it’s so he can gain his wishes when in truth he’s doing it for Alice. They set out to rob a powerful man merely thinking it would be snatch and grab. They should have known a man like that would have a security system.

The monster that’s keeping them prisoner in his kitchen of all places has a weakness. They see him talking to an enchanted mirror. The mirror doesn’t answer him back though. It only display images from a long time ago. There are the monster’s memories. He used to be human.

Earlier Knave/Will thought he and Alice might have to use a wish but not after seeing the monster relive his memories. Which could either a good or bad thing? Jafaar and his queen are plotting ways to get Alice to use her wishes. They need to make her use up hers so that they can start having wishes of their own.

Knave asks Grendel about the woman in the mirror. He wants to let him let go of her. That way they can get the mirror otherwise known as an enchanted knot. He uses his own experiences to try and get Grendel to let them go but it doesn’t work. Neither does escaping it seems because there is a large Hog guarding the door.

The hog doesn’t belong to Grendel. It storms the house, intent to kill everyone in sight. It was sent by the Queen and Jafaar. They wanted Alice to be so afraid she would use a wish but she didn’t. Cyrus had taught her how to defeat it. She did and in doing do she helped Grendel. He wasn’t always a monster. He was turned into one once he stole the Forget me Knot. To return the favor, he allowed Alice and Knave to leave. They were able to take the Knot with them as they left.

Back in the enchanted forest, Will was only supposed to steal gold but he took another object against Robin’s orders. Maleficient found out and threatened them all. Robin knew it was Will the moment he tried to leave under the cover of darkness. He let him go. He said he knew Will is going to get everything he deserves.

The Queen and Jafaar show up not long after Knave and Alice left. They convinced Grendel he was going to be reunited with his wife in return for information. He told them Alice was traveling with Knave and Jafaar killed him. Now he’s reunited with his wife.
Alice and Knave use the Knot to figure out who stole Cyrus’s bottle. Alice is hurt to realize that the White Rabbit would betray her like that. They saw him steal it and give it to the Queen. Knave doesn’t want to give the Knot to the caterpillar. He no longer wants to be a thief. He decides to burn the Knot instead. No one will be able to use its magic once he does.

The woman he had stolen for was named Anastasia. He used the magic to transport them to Wonderland. There she eventual becomes the woman now known as the Queen.