BY Amanda Austin on December 5, 2013 | Comments: 2 comments
Related : Once Upon A Time In Wonderland, Recap, Television 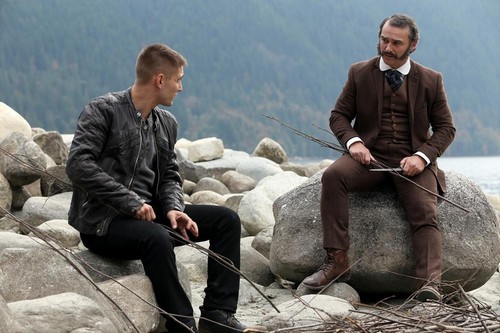 Tonight on ABC their new fantastical, epic adventure ONCE UPON A TIME IN WONDERLAND continues with a new episode called, “Bad Blood.”  On tonight’s show Alice is faced with a heavy decision and we discover what made Jafar become a cold, cruel villain.  Did you watch the last episode?  We did and we recapped it right here for you.

On last week’s episode Jafar payed a visit to the Asylum and Dr. Lydgate to uncover information about Alice, while in Wonderland, Alice headed to the Black Forest on her quest. Meanwhile, the Knave was awakened by magic with the help of an unlikely ally and he went in search of Alice only to find her in terrible danger, and Cyrus did his best to evade the Red Queen. In flashback, Alice returned to Victorian England and her father after losing Cyrus.

On tonight’s show when Alice discovers that her father is in Wonderland, they begin healing their broken relationship, which leads to her having to make a difficult decision. In flashback, a young Jafar is emotionally distraught after his mother dies and we find out what drove him to become the unforgiving villain he is today.

Tonight’s new series is going to be exciting, and you won’t want to miss it. So be sure to tune in for our live coverage of  Once Upon A Time in Wonderland episode 7 — tonight at 8PM EST! While you wait for our recap, hit the comments and let us know how your excited you are about the new series.

Tonight’s episode of Once Upon A Time in Wonderland starts off with a flash back, many years ago in a land called Agrabah. Jafar is a young boy, holding vigil at the bed of his dying Mother. Jafar’s Mother reveals that the Sultan is Jafar’s Father, and tells him to go to the palace, and then she passes away.

Present time: Jafar is visiting Alice’s Father. Alice’s Dad wants to know where Alice is, and Jafar agrees to show him where Alice is. He pulls Rabbit out of his bag, and Rabbit creates a hole to Wonderland. Jafar, Rabbit, and Alice’s Dad return to Wonderland. Alice’s Dad is shocked, Alice had been telling the truth. Jafar tells him that Alice is in danger, and he needs to help him rescue Alice. Alice’s Dad reveals that he will be of no help to Jafar, Alice won’t listen to him, because he never believed her about Wonderland.

Alice and Will are making their way to Syrus. The Queen has men out looking for him also, she knows he must have survived the jump he made off the cliff. The Queen is shocked to see Jafar back in Wonderland. Jafar reminds the Queen that even if she finds Cyrus and has the bottle, she still needs his magic.

Jafar pays his remaining captive a visit in the dungeon, and demands to know how Cyrus escaped. His prisoner is of no help to him though. He has Alice’s Dad tied up in a chair, and is using his blood to concoct some sort of magical spell. He is going to use magic to steal Alice’s love for her Dad.

Alice and Will are stuck, they found the island that Cyrus is on, but have no way to get across the water to it. Alice finds a magical “Bird-Bark Tree.” The wood from the tree can fly.

Present: Will thinks Alice is nuts. She is building a basket out of the “Bird-Bark Tree.” so that Will and herself can float in it up to the island where Cyrus is. Jafar is watching, hidden behind a tree. He drinks the magical potion he created from her Dad’s blood, and transforms into Alice’s Dad. He stumbles out of the woods, and Alice rushed to meet him. She thinks Jafar is her father, and is shocked to see him in Wonderland. Her Dad apologizes for not believing her about Wonderland. Alice doesn’t accept his apology though, she doesn’t forgive him for leaving her in the asylum. She tells him that he is too late, and storms off.

Flashback: Jafar is serving the Sultan during a business meeting. Jafar slips up and calls Jafar “Father” in front of his other son and his business associates. Jafar’s real brother follows Jafar to his room and smacks him for looking him in the eye, the Sultan comes in, and encourages his son to keep beating Jafar.

Present: Will and Alice’s Dad/Jafar are discussing Alice. Will tells him that it is going to take some time before Alice forgives him. Will also reveals that if Alice sees someone hurting, she can’t help but help them, it is in her nature. He tells Alice’s Dad if he wants Alice to help him then he should help her find Cyrus.

While Alice and Will are building their flying basket, a large flying bird swoops down from the island in the air, and tries to attack them. They use pieces of their basket to shield themselves from the fire is spits at them. Jafar/Alice’s Dad is up to something, he has created the bird, he throws himself in front of it, so that Alice has to save them. She slaughters the bird to save her Father, simultaneously mending their relationship.

Flashback: The Sultan is trying to drown Jafar, he holds his head under water, until his body is lifeless. Then he orders his men to drag his body out of the Palace.

Present: Alice’s real Father is in the dungeon with Jafar’s other prisoner. He reveals to the prisoner that he is Alice’s Dad.

Jafar, disguised as Alice’s Dad is eating dinner on the beach with Will and Alice. Alice and Will head down to the water, and Alice reveals that the man with them is NOT her Father. She is on to Jafar, she knows he is an imposter. Will and Alice slip away into the woods, to get away from her fake Dad.

Jafar transforms back to himself, and heads to the dungeon and grabs Alice’s Dad. He returns on his carpet, and holds Alice’s Dad over the edge. He wants Alice to use a wish to save him. Alice realizes Jafar is holding her real Dad. Her Dad feels guilty that he never believed in her, and tells Alice not to waste her wish on him. Before Jafar drops him over the edge, he tells Alice that Cyrus is alive and he escaped from Jafar’s dungeons. Seconds before he falls to his death, Alice uses a wish to save him, she is down to one wish now. Alice wishes her Father back home safely and disappears out of thin air.

Back at home, Alice’s Dad Edwin wakes up. He reveals to his wife that he went to Wonderland to see Alice. His wife tells him it was just a dream, and doesn’t believe him.

Back in the dungeon, Jafar tells his captive it is time for a “chat.” It is revealed that the captive he has held in his dungeon this entire time is his Father, the Sultan. After the Sultan drowned him and threw him out to die, he lived. After he grew up, he returned to the Palace, and killed Jafar’s other son and took the Sultan captive. He is holding the Sultan in the dungeon until the Sultan acknowledges he is his son. Once he gets Cyrus back and changes the rules of magic, he plans to use magic to make his Father, the Sultan, love him.