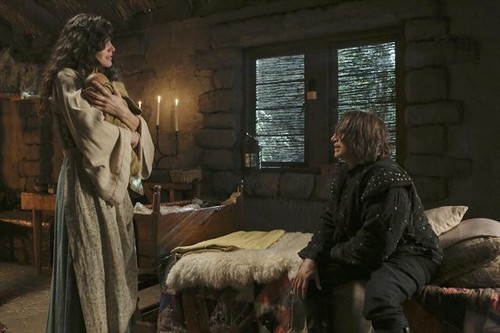 ABC’s hit fantasy drama ONCE UPON A TIME returns tonight with a brand new episode called, “Manhattan.” On tonight’s show while Mr. Gold goes in search of son Bae in New York, Cora attempts to track down on of Rumpelstiltskin’s most treasure possessions. Did you watch last week’s winter premiere episode? We did and we recapped it here for you!

On last week’s episode kidnapped and brought to Storybrooke by Cora, the Giant (Jorge Garcia) unleashed his vengeance on the town when a case of mistaken identity led him to try and settle an old score with David.  Mr. Gold, accompanied by Emma and Henry, attempted to depart Storybrooke – hoping to keep his memory intact when he crossed the town line — and headed to the airport in search of his son Bae; and Greg (Ethan Embry) questions Belle as to what she saw on the night of his car accident. Meanwhile, in the fairytale land that was and against his brothers’ wishes, Anton, the Giant, climbed down the beanstalk and attempted to befriend some humans – whose intentions were not be so noble.

On tonight’s While Mr. Gold, Emma and Henry go in search of Gold’s son Bae in New York, Cora, Regina and Hook attempt to track down one of Rumpelstiltskin’s most treasured possessions. Meanwhile, in the fairytale land that was, Rumpelstiltskin realizes his destiny while fighting in the Ogres War. 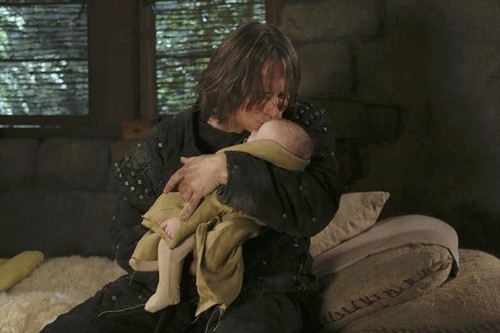 Tonight’s show opens in the Fairytale that was – with Rumpelstiltskin coming home to tell his wife Mila that he has been called to the front in the Ogre world.  His wife is worried, but Rumple feels it will allow him to show the world how brave he is.  Mila tells him to fight bravely and when he returns they can start a family.

Mr. Gold, Emma and Henry arrive to where Mr. Gold’s son Baelfire is and Baelfire does not know that Mr. Gold is coming.  Regina is sitting with Cora telling her that Henry has gone with Mr. Gold to find his son.  Hook wants to know where Mr. Gold is because his magic won’t work if he has crossed the city line.  Cora tells Hook don’t go after him because he won’t have magic.

Cora tells Hook they can search for the one thing that can kill Mr. Gold/Rumple his dagger.

Mr. Gold, Emma and Henry are trying to find Bae.  They go to an apartment building and ring and then they hear someone leaving from the fire steps.  Mr. Gold tells Emma the favor that he wants is to have Emma make Bae talk to him.  Emma goes after the man and jumps him, when he turns around it is not Baelfire, it is Neal.

Neal does not understand what Emma is doing there.  Emma wants to know if Neal is Rumplestilskin/Mr. Gold’s son.  Emma is really upset she thinks Neal knew who she was all the time.  Neal wants them to leave because he has avoided Mr. Gold/Rumple all his life.  He asks Emma to go to a bar to talk.

Mr. gold is upset but Henry assures him Emma is good at tracking down people.  Mr. Gold thanks Henry for being a remarkable young man and it is thanks to him that Emma came to town.  Henry tells Mr. Gold to have hope that his son will forgive him.

Emma wants to know if Neal knew who she was when he met her, he denies he did.  Emma then thinks that he was using her.  Neal tells her he did not know when he met her but he found out later, her friend August told him.  Emma gets upset at him and asks him how he could let her go to jail.

Neal/Baelfire tells her that he did not plan meeting her but he does believe that everything happens for a reason and maybe something good came from it.  Emma tells him NO, she just went to prison and she is over him.  He asks her why she wears the keychain he got her.  She yanks it off her neck and tells him to remind her to never trust anyone again.

Emma tells him to come – she made a deal with his father/Mr. Gold.  He asks her to tell Mr. Gold that she lost him and then she never has to see him again.

Emma calls Mary Margaret and tells her that Henry’s grandfather is Mr. Gold and she does not want to tell him.  Neal is Henry’s father.

Henry is with Mr. Gold and asks him why he is so nervous.  Mr. Gold tells him because things don’t always happen the way you want them too.  Henry does not understand because Mr. Gold can see the future.  Mr. Gold tells him seeing the inevitable is a horrible price.  The future is a puzzle difficult to read and never what you think.

Emma comes back and tells Mr. Gold his son got away!

Regina comes in to see Belle and Belle does not recognize her.  Regina tells Belle that she believes she can help her find something that belonged to Mr. Gold.  Belle tells her she does not know Rumple/Mr. Gold Regina puts a spell on Belle and Belle goes asleep and things starts coming out of her purse.  She finds a slip of yellow paper with the number 915.63 written on it.

Regina, Hook and Cora head to the library and Regina thinks that the numbers will lead them to the dagger.  They go through the books and they find a map which hook says he can read.

Mr. Gold goes back to the apartment building where they saw Baelfire his son and he is going to break into his apartment ad wait for him.  Emma tells him not to do it and Henry tells her he will be the lookout.

Back in the Fairytale that was injured men are coming back from the front line.  A soldier tells Rumple that the injured men are lucky because they  get to go home.  The soldier goes on to tell Rumple at lease they were only injured and not torn limb to limb by the Ogres.  The head of the army tells everyone to grab a saddle they are going to the front on horses this time.  Rumple is terrified – he keeps saying he is going to have a son and he is going to die.  While no one is looking Rumple picks up a hammer and slams it into his foot.

Back in Storybrooke they go into Baelfire’s room, Emma finds a dream-catcher in the window and takes it.  Mr. Gold realizes that Emma is holding out on him.  Mr. Gold threatens her and tells her no one breaks deals with him.  Baelfire/Neal slams into the room and tells Mr. Gold to leave her along.

Rumple heads back to see Mila and walks into the room and sees her with his son, he asks what his name is and she replies Baelfire.  She is upset and asks if he injured himself to get out of going to the Ogre World.  He admits he did it to save his son from growing up without a father.  She tells him she left him to a worse fate he has to grow up with everyone knowing his father is a coward.  She tells him he should have fought and died.  She takes his son and puts him in Rumple’s arms and he leaves.

Back to current time, Mr. Gold tells Bae he came back for him.  Bae/Neal tells Mr. Gold he came back to make sure he did not hurt Emma, because he knows what Mr. Gold does to people who do not keep deals.

Mr. Gold realizes that Emma and Mr. Gold know each other.  Neal asks Henry how old he is and Henry answers 11.  Neal asks Emma if Henry is his son and Emma answers YES.  Henry is upset and runs away because she told Henry his father was a fireman.

Emma runs after Henry.  Mr. Gold wants to talk to Bae and he tells Bae Emma’s deal will be fulfilled if he talks to him.  Bae gives him 3 minutes.

Back in the Fairytale that was Rumple is walking in the forest and he bumps into the Seer again.  She tells Rumple what she foretold has come to pass.  Rumple tells her she told him the overview but forgot to tell him the details.

The Seer tells him knowing the details would make no difference.  Rumple wants to find his son, she tells him Rumple will find him and it will not be an easy path and there will be a curse that someone will cast and he will not break the curse, someone else will.  She tells Rumple that is all she knows.  She tells Mr. Gold if he takes the burden from her, he will know more.  He tells her he will gladly take it.

Back in current time Neal wants to see Henry and Emma tells Neal he can see him but he better not mess him up.  Neal goes to speak to Henry.  Neal apologizes for taking so long to meet him.

Rumple looks out the window and remembers back when he took the Seers burden but he cannot see anything it is too bright.  The Seer tells him he will work it out.

She gives him one tidbit she tells him he will meet his son again and a boy (Henry) will lead him to his son.  But the boy will be Rumple’s undoing.

Rumple answer’s then he will kill him.

We all know that means Henry, Yikes!

Once Upon A Time will be back in 2 weeks.