BY Nicholas Sanford on September 8, 2013 | Comments: Leave Comments
Related : Once Upon A Time, Spoiler, TV 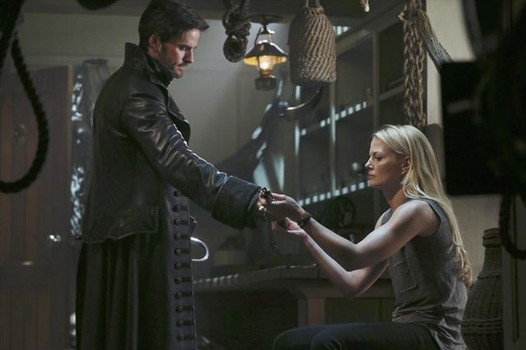 Of all the shows returning in the upcoming seasons, we’re quite excited to jump back into the fairy tale wonderlands of Once Upon A Time, which will be returning to ABC on September 29th. On the season 2 finale, we saw some of our favorite characters — including Rumple, Emma, Regina, Snow, Charming, and Capt. Hook — dock a ship and depart for the mysterious realms of Neverland. In a new twist on a classic character, Peter Pan seems to have been set up as on of this season’s major antagonists, and it will be interesting to see how the show’s creators deal with this character’s darkness.

We have some wonderful photos from the first episode, and they primarily feature Emma and Hook. While we still believe Emma’s in mad-love with Baelfire, it’s fairly obvious she has a lil’ thing for Hook — that dark, brooding, bad boy of a pirate. Where will that romance go, if anywhere? The pics definitely looks like it goes somewhere — or at least tries to go somewhere! While we do want to them to kiss (or something), we do hope it doesn’t turn into too huge of a love triangle/hot mess.

In this upcoming season, filled with many new characters, we’ll be introduced to Ariel (AKA Little Mermaid) and Prince Eric. You know, because we really need another princely figure walking around being all suave and heroic and stuff. Co-creator Adam Horowitz has described Ariel as being an . . . . “Adventurous. Spitfire. Romantic.” (Which basically describes every character on the show).

What are you looking most forward to on the third season of OUAT? I watch the show for all the dark characters, and with Peter Pan being thrown into the mix — who seems to have even the darkest characters (Regina and Rumpel) filled with a bit of worry — the intrigue has doubled!

Check out the gallery below! For news on Once Upon A Time In Wonderland series CLICK HERE.