One Direction will Not Spiral into Craziness, Epic Partying, and Self-Destruction Like Justin Bieber — or so says Simon Cowell! 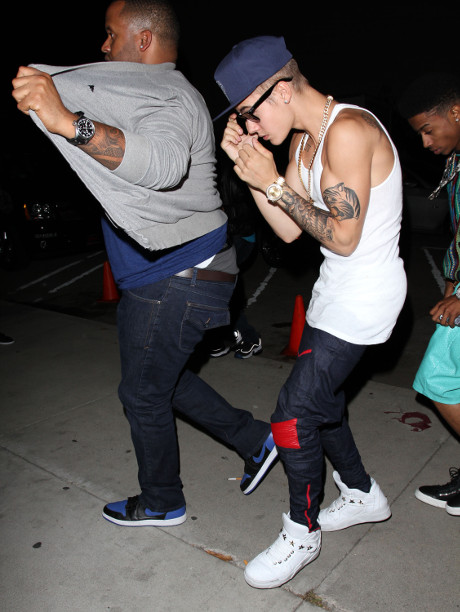 There’s no hiding the fact that Justin Bieber is heading down a path of craziness; his epic partying and self-destructive habits that have seemed to evolved over the past couple of months have gotten endless attention from news outlets, as well as his fans. But if there’s one thing the celeb world isn’t short of it’s boy bands/boy pop stars. While the Beebz is popular, the next highest profile act is One Direction, who are just as, if not a bit moreso, popular than Mr. Drop Crotch Pants.

Harry Styles, Zayn Malik, Niall Horan, Liam Payne, and Louis Tomlinson’s manager, the famed Simon Cowell, is quite adamant that he will not let this group of boys hit rock bottom — which he feels has already happened with Bieber. And the source of this craziness? Simon Cowell alludes to the fact that Bieber has made too much money! What do people tend to do with money? Spend it of course! And some people choose to spend that money unwisely.

“If I ever thought one of our artists was being over worked or over promoted you would just have to say to them ‘you’ve made enough money, take a year off,'” he told Fox News (via Metro) when the subject of Bieber and his string of personal issues was brought up. “You have to be sensible about it,” he added.

Bieber better get his little act together before he does something that can’t be fixed by his PR people. His managerial team seems to possess an endless amount of magic, but we just hope he gets back on track before he does something he’ll regret. I think a break might to the pop star some good. What do you all think? Let us know in the comments section below.

One Direction will Not Spiral into Craziness, Epic Partying, and Self-Destruction Like Justin Bieber — or so says Simon Cowell!