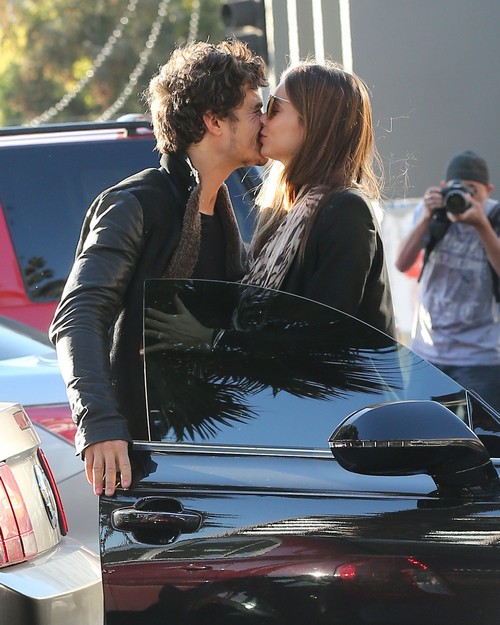 Miranda Kerr and Orlando Bloom just announced their split, but just one day after the announcement broke, they seem to be back together – or at least, giving the appearance that they are.

Of course, Orlando and Miranda have both insisted the split is ‘amicable‘, but I can’t seem to conceive of a situation where a couple would divorce and then go out together in public within days, and even kiss in public. Sure, they could be trying to make a point to the paparazzi, because I don’t believe they didn’t know the paps were there. They definitely knew, and they could have staged everything. But even then, what was the purpose? To prove that they weren’t going to let a little thing called divorce get in the way of their raising their son, Flynn Bloom? To prove that the cheating allegations weren’t true, and that they are still a happy family unit?

Or maybe, there was never any trouble to begin with. It’s possible that Orlando and Miranda were in some sort of an open marriage arrangement, especially towards the latter part of their marriage. Their behavior would corroborate that story, explaining why Orlando would stay with Miranda when it was clear that she was flirting and hooking up with other men. If they both had this arrangement worked out, then they might actually have never been on bad terms to begin with. Maybe they realized that they could no longer put up the charade, especially since Orlando’s finally attempting a career comeback. Nobody will hire Orlando if it comes out that he is in an open marriage and has a three-year-old son. That won’t fly, even in amoral Hollywood. Miranda’s image has taken a beating from all the cheating allegations, and it’s not like she can exactly broadcast the fact that she’s in an open marriage, especially with Flynn around, right?

So if there was never any issues between them, and their divorce was a mutual understanding, then of course there wouldn’t be any hard feelings. There could even be lingering romantic feelings, which would explain the public kiss. And they do genuinely seem like they’re trying to keep everything as normal as possible for Flynn, which is admirable. So, are they trying to prove a point with the public displays of affection, or are they just doing it for their son? Or both? Let us know what you think in the comments.