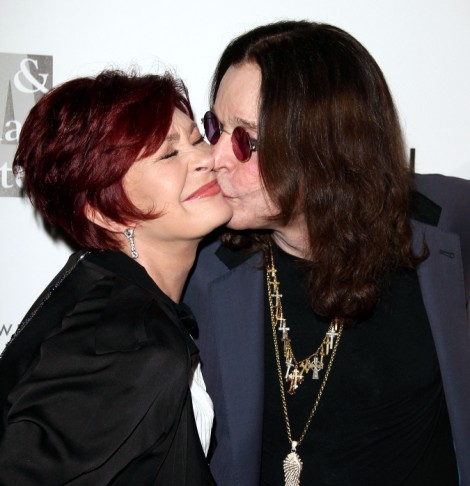 Have Ozzy Osbourne and Sharon Osbourne rekindled their love? Oh God, please make it so. We already lost Rob and Kristen today. I think we could all use some good news.

TMZ reports the couple was spotted in Beverly Hills for a lunch date. This sounds good, right? It’s their first public appearance together since the fall out. I’ve heard from a few sources that there was cuddling and The Sun is even going so far as to suggest Ozzy is having all his things moved back into Sharon’s place and Sharon is back to wearing her huge rock. But TMZ wasn’t so optimistic. It states the meeting felt more like a business meeting and there was another dude there with them. That doesn’t sound very romantic at all…. HOWEVER, the couple then joined Kelly Osbourne on the red carpet at the An Evening With Women event later that night. So my guess is everything is on the right track. Ozzy even gave Sharon a peck on the cheek!

This whole break up started because apparently Ozzy fell off the wagon and Sharon couldn’t take it anymore. Jack Osbourne confirmed the story on the Dr. Oz Show but said he got back on his treatment program and has been sober ever since. Ozzy facebooked that as well. It’s been about two months so perhaps Sharon is ready to give him another shot? I feel for Ozzy. He’s had a rough year with Kelly and Jack’s health issues and it seems like Sharon’s super busy with all her shows. I’m not making that many excuses for him. I doubt I’d do the same for anyone else but this is Ozzy. It’s plain as hell he’s not stable and can’t cope with every day things let alone difficult ones so I cut him slack. But it must be difficult living with that. I don’t know how she does it.

Are Ozzy and Sharon back together? Is that a good decision? I know it most definitely is for Ozzy but is it for Sharon? Can he last without her?