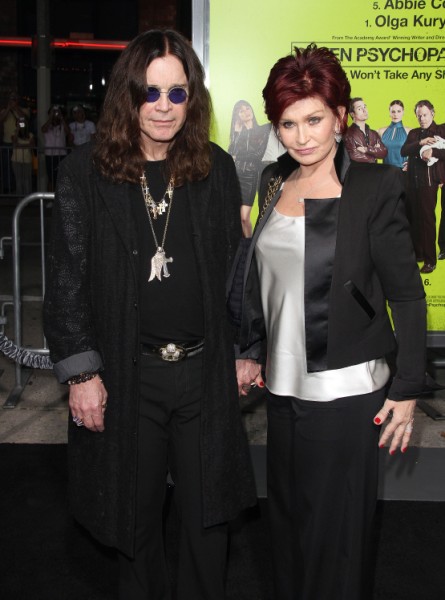 Can we all just take a second for a “NNNOOOOOOOO!”?

My God, how do you take news like this first thing Sunday morning? It’s almost too much. Sharon Osbourne and Ozzy Osbourne split rumors are everywhere! Well, not everywhere. The Sun started them and we all know it isn’t the most reliable source but Sharon and Ozzy aren’t the usual tabloid fodder either. If people are sensing trouble there could be trouble which is making me whole lots of nervous….

The Sun reports that Sharon moved out of the family home three weeks ago and has been holed up in a hotel. She and Ozzy have had very little contact and she’s no longer wearing her wedding ring. Add this along with a few cryptic texts from Sharon and Kelly Osbourne moaning about family troubles and you’ve got a full on break up crisis.

“They are living at different addresses and are not spending any time together. They row a lot. They aren’t acting like husband and wife. It is unusual to not even have dinner together when both of them are five minutes apart,” the source said.

Now, let’s put this in perspective. We all know this hasn’t been the easiest year for the Osbournes. Kelly just recently had a seizure and Jack Osbourne was diagnosed with MS. That had to put a strain on the relationship. Ozzy isn’t the most stable when the shit hits the fan. Sharon has mentioned before that he tends to revert back to his old druggie ways when bad news comes so perhaps that’s what is happening now. Maybe she’s distancing herself while he gets his shit together. By now she knows him well enough to know he isn’t going to stop. There is no rehab for Ozzy but they manage his issues as best they can. Perhaps she couldn’t be around for it this time. Can you blame her?

But I just can’t believe they are done. Sharon would never leave Ozzy, right? They’ve been through too much! Still… there comes a point when enough is enough so I’m still not totally secure about this. Ugh, say it ain’t so! Do you believe the Sharon Osbourne and Ozzy Osbourne breaking up stories? Is she finally done with his problems?