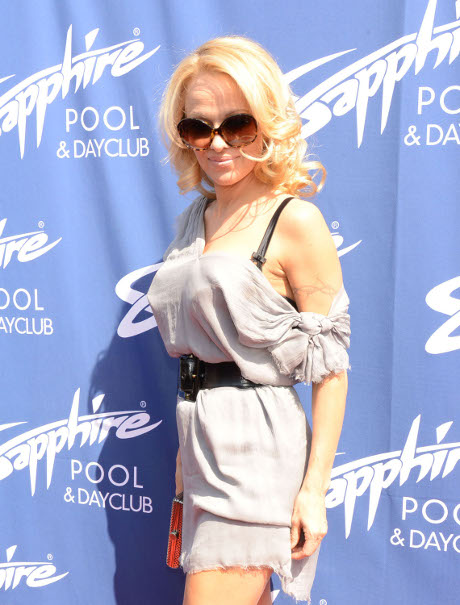 According to new reports, an ad featuring Pamela Anderson has been banned in the UK by the advertising authorities because it was deemed ‘sexist’ and ‘degrading’ to women. Um, this is Pamela Anderson we’re talking about – of COURSE it was sexist and degrading to women. She was part of a show that was primarily known for showing women’s chests swinging in slow motion, what else do you expect?

Either way, Pamela was featured in an ad for Dreamscape Networks which showed her in a business meeting with another woman. As the meeting gets underway, their male co-worker starts to fantasize about Pamela and the other woman stripping off and getting covered in cream.

Dreamscape Networks argued on behalf of the ad, claiming that it was always meant to be ‘over-the-top’ and ‘comical’. However, the ASA [the Advertising Standards Authority in the UK] disagreed and said, “[The ad was] likely to cause serious offense to some viewers on the basis that it was sexist and degrading to women.”

I’m very glad the ASA actually intervened on this. You never see ads where men are stripped down and women are fantasizing about them, do you? If it happens on television, it should go both ways, or not at all. I’m not surprised that Pamela Anderson agreed to this considering that for some weird reason, people still find her attractive. This has also happened before, so people who hire her really need to think before they design their ads.

What do you think? Does the ad seem like it would be offensive to viewers, or should the ASA have let it run on television? There’s also the fact that in addition to being ‘offensive’ and ‘sexist’, it’s also inappropriate for small children to see on TV. However, we don’t know the details of when and what channels the ad was running on, so we can’t really make a judgment call in that regard.