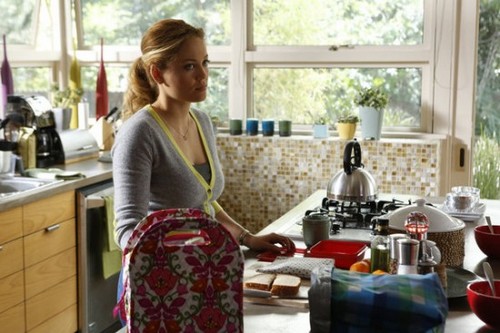 Tonight, the hit show Parenthood airs on NBC with its third episode of season 5. The episode is titled “Nipple Confusion” and will continue with several of the story lines that were established in last week’s premiere.  Zeek (Craig T. Nelson) tries to steer Camille (Bonnie Bedelia) to his way of thinking about what to do with the storied Braverman house.  If you missed last week’s episode, CLICK HERE for a full recap.

On last week’s episode An Amber alert rocked the Braverman family while Jasmine (Joy Bryant) and Crosby (Dax Shepard) had to walk on egg shells as the baby’s crying began to take a toll on Jabbar (Tyree Brown) too. Julia (Erika Christensen) met a school parent volunteer Ed Bliss (David Denman) and found they have a lot in common.

On tonight’s show Crosby (Dax Shepard) and Jasmine (Joy Bryant) find parenthood the second time around to be twice as tough, while Kristina’s (Monica Potter) campaign with the ever-presence of Heather (Jurnee Smollett) creates a new dynamic with Adam . Meanwhile additional pressures push Joel (Sam Jaeger) and Julia (Erika Christensen) in potentially problematic directions and Sarah (Lauren Graham) seeks help and comfort from Hank (Ray Romano). And Zeek (Craig T. Nelson) tries to steer Camille (Bonnie Bedelia) to his way of thinking about what to do with the storied Braverman house.

Will you be watching tonight’s episode? We will! Don’t forget to come back here later tonight at 10 PM EST to get your full LIVE recap. What are you most looking forward to on season 5 of Parenthood?

Adam swore he would back Christina in her mayoral run yet he hates opening his wallet. It’s understandable. He is a small business owner that needs to count up all of his dimes but will Christina feel the same when he starts asking her to cut back. Currently Christina’s campaign manager, Heather, is running through ideas and money quicker than Adam can count. Will his “support” end up meaning debt because that’s how it looks.

Amber has a bad run-in with Drew. He wanted to escape the dorms when he saw his roommate put a sign on the door that he has company. If only Amber had done the same. Drew walks in on her and Ryan. He wants to go and yet Amber convinces to stay. She says she doesn’t mind but Ryan does. Awkward!

Zeek isn’t ready to sell his home. If he was then he wouldn’t have thrown himself into a yearlong project. Camille knows what he’s doing and she when tries to talk him out of it; she gets ignored. Zeek isn’t leaving that house willingly.

Julia and Joel got called in to see Victor’s teacher. She was concerned over how far Victor has come. He has made progress but not enough. The teacher wants to hold him back for a year. Later, Julia wants to think about what to do when he gets held back. Joel says she’s going nuclear. Joel wants to fix this by hiring tutors or reading to Victor more and he can’t. Those plans won’t work. He just has to accept it and start thinking like Julia.

Adam was complaining over money when Sarah came in. One of his newest grievances is the cost of a photographer. Christina has to get a professional photo out there but it’s costing in the hundreds. Sarah offers to do the photos for 50. Adam loves the idea after a while but Christina wants to use a professional instead. Adam tries to explain he’s worried and despite her claims of donors eventually coming in he needs to think about their expenses. She refuses to listen. All she hears is that he looked at her budget sheet behind her back and he won’t trust her like she once trusted him.

Sarah is very proud about her job shooting Christina. She’s even bragging to Hank when she gets the call. Her own sister-in-law won’t take her seriously. She tells Hank she got fired and he’ not giving her the sympathy she was expecting. He understands why her family would think she was flighty.

Sarah goes to Christina with a pitch. She willing to sell her newest work and how good she’s gotten in order to win back the job. Christina doesn’t really want to but when Sarah keeps on appealing how serious about this she’s gotten, it wins a small part of Christina over. She gave her back the job.

Julia is frustrated. She can’t talk to Joel and she he won’t allow her to talk to Victor about his progress. Her new friend, Ed, on the other hand is willing to face the possibility of Victor being held back. He says be honest with the kid. Don’t allow hi to think he’ll be in the next grade with all of his friends when he won’t be.

Crosby goes to his dad for advice. He wants to feeds Aidia with a bottle but she refuses to take it. He only wants to be breast fed. It feels like she’s resenting him. His dad tells him that it’s phase and it’ll pass. It wasn’t going to be easy and Crosby may have been fooled when he became a parent to an already five year old.

The photo shoot is hectic. Max is interfering. Heather is interfering. Even the toddler wanting her mommy keeps getting in the way. Sarah can’t handle this crowd. A professional might have. Feeling nervous that she couldn’t pull it off, Sarah goes to Hank with the photos. He views her work and manages to find a really good one.

Drew is back at Ryan and Amber’s. He tried to talk to his roommate about being respectful only to be to be told to get over it. The couple feel they need to do something to help so they go with him to confront his roommate. It’s time to lay down ground rules. Don’t use Drew sheets, stopping touching his stuff, and stop locking him out of the room for hours on end.

Julia tells Joel they need to hold back Victor. She makes the mistake by saying she spoke about it with Ed and they both agree. Joel won’t agree to that and if she has a problem then she could talk it over with Ed.

Christina really liked the photo. It made her think about a lot of things like maybe she should pull back with the spending. After hearing her admit to wanting help though Adam says he has no choice but to give her his credit card. It’s not bad she’s listening. It also won’t hurt if he trusted her decisions.

Zeek told Camille he doesn’t want move out loud. It’s his home and he has too many memories to simply sell the place. Camille hears him but she’s ready for the next step.

Drew did gt to use his room to impress a girl… with scrabble.

Crosby got his daughter to take the bottle. She needed to be sweet talked to.

Julia is helping Victor to concentrate on his reading. She knows that’s what Joel would prefer.