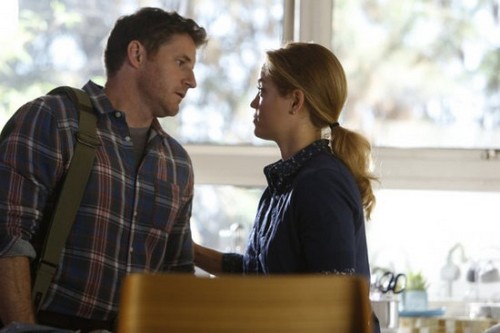 Tonight, the hit show Parenthood airs on NBC with its 4th episode of season 5. The episode is titled “In Dreams Begin Responsibilities” and on the show tonight Crosby (Dax Shepard) handles high-maintenance rockstar Oliver Rome (Tyson Ritter).  If you missed last week’s episode, CLICK HERE for a full recap.

On last week’s episode Crosby and Jasmine found parenthood the second time around to be twice as tough, while Kristina’s campaign with the ever-presence of Heather created a new dynamic with Adam . Meanwhile additional pressures push Joel and Julia in potentially problematic directions and Sarah sourght help and comfort from Hank.  And Zeek tried to steer Camille  to his way of thinking about what to do with the storied Braverman house.

Sarah is still holding onto her reservations about the wedding yet she won’t tell them to Amber. Even the location they chose has something wrong with it. It’s too small and rocky. How Amber’s elderly relatives are going to make it uphill. Then there’s the fact that Ryan won’t have any relatives at the wedding. He says his mom can’t make it. No explanations and Sarah can’t get any wit Amber guarding him.

As her daughter’s love life speeds ahead, her son runs into wall. The “friendship” wall. The girl of his dream only sees him as best friend material. Now that he got the room to himself once in a while it seems he won’t be using as much as he thought he would. He needs help. He goes to Adam to learn how to love Joni Mitchell. His dream girl loves her.

Adam and then Crosby tell him that the way to win her is to immerse himself into Joni Mitchell. He has to do more than just lie about liking her. He has to sell it.

Earlier, Adam and Kristina have to raise money for her campaign. The donors aren’t as big as they would like. So they move to plan B. Heather and Kristina want Adam to ask his clients for donations. He doesn’t like that idea. He feels he’d be pressuring them. That’s when they get the great idea of Adam asking his former clients for donations. Helping out Drew at least takes his mind off all of that.

Sarah talks to Amber about Ryan’s non-family. She wants to know more and she can’t understand why Amber doesn’t know anything as well. Amber acts fine in front of her and then she begins to ask Ryan he important questions. He says he doesn’t want his stepfather to be at the wedding and that’s why he can’t invite his mother. Well, what about his real dad? Ryan is only just telling her that his dad died. Amber is marrying him and she only recently learned this.

Crosby and Adam had a client with an aggravating band. The manager finally had enough and he fired the band after one too many diva episodes. Crosby is happy but Adam has to think of the bottom line. They lost a paying client.

His day went from bad to worse. He went to one of his former clients to get a donation and ended up talking about life instead of Kristina’s campaign. Kristina is disappointed but she understands. Heather on the other hand comes bearing gifts. She may have gotten a large donor. Although he’s a real estate developer. Kristina simply doesn’t want to sell her ideals but this is the first man to offering a big check.

Julia was having trouble dealing with the kids. They had recently begun to argue more. She tried to be tough with them and got nowhere. As a last resort she took them to her dad and let him put them to work. It does a world of good for them until Zeek needs one of them to read directions. Victor tried but he was struggling to read. Sydney didn’t want to wait for him to get it right. She took over and began to read flawlessly.

Zeek speaks to Julia afterwards. He’s able to an extra ear for her to talk to. He doesn’t make any judgments. He merely says he’ll be there for her.

Adam wants to start his own label. As he was speaking about life he learned that he didn’t want to work for the man. Crosby tells him all of the pitfalls yet he can’t get rid of Adam’s optimism. Crosby offers to help in any way he can. Never mind this is a big risk.

A risk he only fully comprehends when Kristina had to take money from a developer. She feels grossed out by it. He tells her the money won’t matter if she does good with it yet she still doesn’t feel right. She’s going to returns the money. Adam returned to his favorite rapper and this time he asked for a check and he got it.

Sarah talks to Amber about Ryan. The moment she tries to calmly talk her, Amber goes off. All she hears is her mother trying to control her life. When Sarah mentions all of the warning signs it only serves to get Amber even more angry. She feels her mother had been saving incidents up just to throw them back at her. She does want her mom at the wedding but she’ll be in charge of everything else.

Zeek asks Victor to continue working on the car with him. It’ll be their special project. No Sydney. As a requirement Victor needs to read the directions to him even if he reads slower than Sydney. He got Zeek interested in what he’s reading.