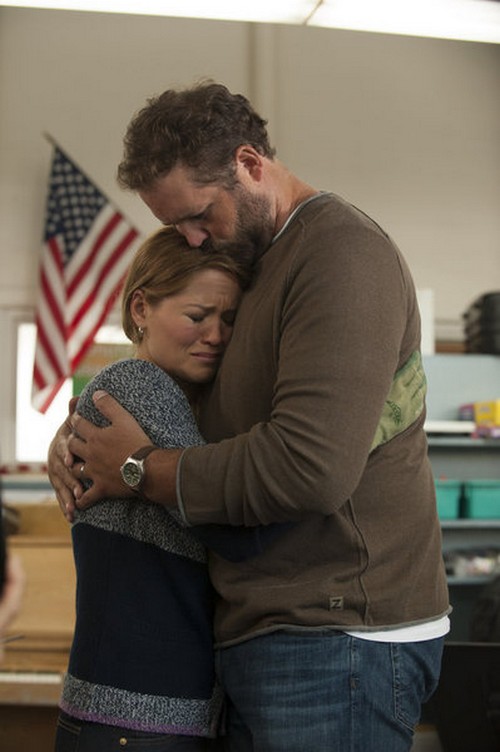 Tonight, the hit show Parenthood airs on NBC with its 4th episode of season 6. The episode is titled “Election Day” and on the show tonight Sarah (Lauren Graham) helps Hank (Ray Romano) with a family affair.  If you missed last week’s episode, CLICK HERE for a full recap.

It’s time for Victor to be demoted down to Sydney’s grade and although is parents are doing their best to be supportive, his friends have shown their true colors. They actually snicker at him on his way to his new classroom. Julia keeps trying to come out with warm endearment s and platitudes but it’s a bit hard for both Victor and Joel to listen to them. Victor would rather be angry than try to be brave.

While Joel would prefer to be suspicious. He never liked the idea of Julia discussing their family concerns with her new friend Ed. A part of him wonders if Ed may have an input with Julia being ok with their current situation. He also notices how she and her “friend” remain in constant contact. He looked at her cell phone real quick and realized the two have been texting each other a lot lately.

In their own way everyone in the Graham household is mad at Mom. Even Sydney. She sees how much Victor has been allowed to get away with and gets mad that he doesn’t have to face any punishment. But she does when she gives her mother a hard time.

There is one person that needs to be talked to but that’s only if his fiancée stops tip-toeing around the issues. Amber found a pills bottle in Ryan’s clothes. She wasn’t looking; they just fell out of the laundry. She saved the subject until later but it wasn’t perfect timing. She came home after a great day working for her uncles. She finally got an opportunity to sing and then she returned home to Ryan. Who is still be passive aggressive over the whole ring situation.

She wanted to address that problem first before moving on to the pills. He said he wasn’t angry and that everything was fine but it’s not. She asked him about the pills and he said it was an old bottle. A lie. She saw the prescription was refilled two weeks ago. He tries to work himself out of the mess he made and unfortunately Amber lets him.

Relationships are tough. Even starting one can become a hassle. Max met Hank’s daughter, Ruby. The tow did not hit it off right away. As a matter of opinion, its up there on whether Max did or did not insult during their first meeting. Not that it stopped Max from asking her to be his girlfriend. It wasn’t surprising when she said “no”. Yet Hank didn’t let a little thing like her feelings stop him. He asked Ruby to pretend to be Max’s girlfriend and then couldn’t figure out why she was Angry. Sarah had to be the one that was a dumb idea. It also taught his kid to lie.

Take a lesson Crosby. Lying to your kids is wrong. He also shouldn’t have lied to Jasmine. They’ve all been helping out on Kristina’s campaign. Jasmine loves it because she’s always been a proud voter. Crosby tried to play it off as if he was on as well. Then when Election Day did arrive, guess what, Crosby didn’t know where he was registered. Why? Because he never voted. He had his son with him so thinking on his feet he came up with voting “public”. He basically told the moderator who he was voting for. Jabbar doesn’t get what his father pulled until he tells his mother about it later.

Everyone is supporting Kristina right now. Including friends who should be in the hospital getting their chemo. Too bad Julia is feeling extremely alone. She did what she never done before. She went to Joel’s job and demanded to speak with him and he refused. Maybe it was her snapping at his co-worker but he didn’t fell up to dealing with her.

Amber was out celebrating with the band. They chose to keep her voice on their song. She was enjoying herself until she realized she missed several calls from Ryan. She called to tell him where she was and he decided to come down to the bar and try to force her to go home. She refused and the band members tried to help when Ryan completely loses it. He gets into a fight with them. The police get involved and Amber calls her grandfather to come down to the precinct.

The reason Joel was so upset is that when she was at work, he always supported her. Why couldn’t she do the same for him?

Kristina ended up not winning even after Crosby bribed a voter to vote for him. Thankfully, she had written a concession speech and the crow did love it. She did accomplish something. She may not have won but the schools will better just from her involvement.