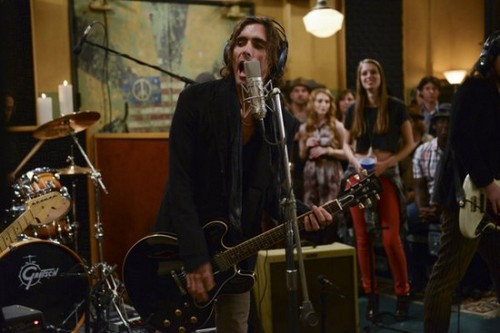 Tonight, the hit show Parenthood airs on NBC with its 4th episode of season 6. The episode is titled “Speaking of Baggage” and on the show tonight Zeek (Craig T. Nelson) bachelors it up when he is left home alone and Max’s (Max Burkholder) new interest in photography leads him to find some pictures from Hank’s (Ray Romano) past with Sarah ( Lauren Graham).  If you missed last week’s episode, CLICK HERE for a full recap.

On last week’s episode Sarah and Amber struggled with the wedding bell blues while Julia and Joel tried to keep it all together. Kristina and Adam hit the campaign trail hard and enlisted Team Braverman to go door-to-door, while Jasmine helped usher in a new era for Crosby and his band on the run. Zeek gave Camille a little of what she wanted. The show also starred Max Burkholder, Miles Heizer, Matt Lauria, Savannah Paige Rae, Xolo Mariduena. Guest starring, David Denman, Jurnee Smollett.

RECAP: Julia goes to see Joel and she has a sexy outfit on and tells him she didn’t go there to talk. Camille is going over a lot of information with Zeek so he will be ok when she goes away.

Hank and Max are working together at the studio, when Max goes into a drawer he sees photos of Sarah and asks Max why they are there. Max compares Hank to a serial killer who also had photos hidden; Hank tells him that he is not a serial killer. Max asks Hank if he still likes Sarah, he says no. Max says if he didn’t like her, he would throw away the picture. Hank says that he liked her once, it didn’t work it, they had too much baggage.

Amber is hanging out with the band, one has his hand around her when Ryan walks in. Ryan tells her that they can get married, Amber tells him the plans may have changed because her mom wants to be a part of it; maybe they should have a real ceremony. Ryan tells her whatever she wants to do, but you know he is disappointed.

Most of the family is having dinner together and Joel is not there, Zeek asks Julia about it and she says that he is working hard. Max announces in front of the whole family that Hank has a picture of her in his drawer but he doesn’t like her anymore because she has too much baggage.

Camille makes an announcement of her own, she is going away with art class and Zeek is not going. Adam asks Zeek why he is not going, Zeek ignores the questions because as we all know Camille didn’t want him with her, he then asks Adam to pass the mash potatoes.

Sarah goes to visit Hank, she tells him that it is sad sometime that it is over between them, but it is over. Hank says he knows it is over, they discussed it a while ago. Sarah goes on to say that Max said some things at the table that were intimate and she doesn’t want Hank to talk about her. Hank says he is just trying to do something good with Max, but maybe he shouldn’t be there.  Hank tells Sarah that he has a job to do and basically tells her to go.

Amber has an idea, she tells Adam and Crosby that she wants to through an actual concert for them to record the song; they both say yes.

Julia, Adam, Crosby and Sarah are out for a coffee talking about Zeek and Camille; three of them don’t like that Camille is going to Italy alone. Julia tells them that mom is doing something else for a change for herself and dad should just deal with it and so should the rest of them.

Drew asks a girl to Amber’s band party. Julia is at home, she has no patients with the kids and yells at them for having their toys everywhere. Julia goes outside for a breather, she calls Joel and tells him that she lost it in a whole new way with the kids. Joel tells her to take the kids to her dad, she tells him it is not the kids, she is losing a bit. People are calling Joel in the background, she knows he is busy and tells him goodbye, he is quick to hangup the phone phone.

Kristina is with Amber and she tells her she is stressed; Kristina thinks she is talking about the wedding and Amber was really talking about the party she is arranging for the band. They start talking about when Adam proposed to Kristina; she tells Amber how simple and pure it was. Kristina gets a text from Heather and has to go.

Julia is helping Camille pack, she tells her that she is proud of her. Amber is at her event, Ryan is watching her work and you can clearly see that he thinks he doesn’t fit in. Drew is there too, he is looking for his friend and when Adam and Crosby start giving him a hard time, he tells them she is not his date. The girl arrives and she has brought friends with her.

Drew is with the girl he slept with again and she downplays their “relationship” and tells him that they are both in college and it was a just a hookup, he reluctantly disagrees. Amber is congratulating the band, Ryan sees it and looks sad.

Adam goes to see Zeek and suggest he supports Camille. Zeek loses it and tells him that Camille want to sell the house and that is not his life. Furthermore, Zeek tells Adam that he is not going to Italy because he was not invited.

Hank goes to see Sarah, he tells her that he was thinking about the whole Max thing, he likes him and he stays. He then tells Sarah that he got rid of the pictures, then he asks her if she did something different with her look, after that he leaves.

Ryan bought a ring for Amber, he proposes to her formerly, tells her that he loves her. Amber tells him they can’t afford the ring, he says he spent his combat pay on it, he saved it up and he has never been so sure of anything in his life.

Julia is so stressed about everything, she calls Ed again for support and he tells her that she just made his day so much better.

Drew is in his dorm, the girl is back at his door and he tells her that he is confused. If they are friends, then why is she there. Drew kisses her and she goes into his room.

Camille is leaving, Zeek walks her to the cab to say goodbye to her. Camille is about to leave, she gets back out of the cab and gives Zeek a big kiss. Zeek heads into the house and doesn’t take long for him to set off the alarm on accident without Camille.