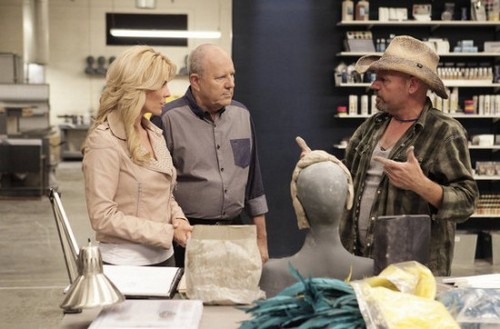 Tonight, the hit show Parenthood airs on NBC with its 4th episode of season 6. The episode is titled “The M Word” and on the show tonight Jasmine (Joy Bryant) helps usher in a new era for Crosby (Dax Shepard) and his band on the run.. And Sarah (Lauren Graham) talks toe-to-toe with Ryan (Matt Lauria) and Amber (Mae Whitman).  If you missed last week’s episode, CLICK HERE for a full recap.

On last week’s episode Max’s photography knew no bounds while Joel (Sam Jaeger) struggled for boundaries with Peet (Sonya Walger). Adam (Peter Krause) and Crosby (Dax Shepard) too had to set boundaries with the band for the betterment of their new business. Meanwhile Julia (Erika Christensen) and Camille (Bonnie Bedelia) had something in common that does not make them happy. And Sarah (Lauren Graham) talked toe-to-toe with Ryan (Matt Lauria) and Amber (Mae Whitman).

RECAP: Kristina is upset that she only got 7% of the vote after all her hard work. Amber goes over to see Sarah and is surprised that she has cooked for her. Amber wants to talk about their intense conversation when Sarah insulted her fiance. The two are getting into an argument, Sarah says that she is there for her, but she doesn’t agree with her. Sarah says she doesn’t want her to get married but it doesn’t mean she doesn’t support her, Amber walks out.

Zeek talks to Camille about the condo, wants to know how they should go about it. Zeek says he is free tomorrow and he’ll go with her if she wants, Camille is thrilled, but Zeek promises he’s not sure if he is going to like it, but he will go look at it with her.

Julia and Joel are out canvasing for Kristina when Joel gets a business call from Peet. Joel tells Julia that he has to call Bill back before the end of the day, his phone rings again and he takes it, Julia is on her own to canvass the balance of 30 homes.

Crosby, Jabar and Jasmine are looking at mini vans and he is not thrilled about it.

Amber is at home, she tells Ryan what happened with her mom, he suggests that they forgo a big wedding and just go down to city hall.

Kirstina is practicing for her debate and is really stressed out, the basis for her platform is that she is passionate about education and she does not want to talk about Max and  his disability or how the education system works for him.

Crosby tells Adam that he is getting a mini van and he is not thrilled about it. Adam reminds Crosby that he is a family man now and the mini van fits, Crosby says that he should just get a tattoo across his forehead that says neutered. The band wants to go out for a drink and Crosby is in, Adam won’t go.

Julia is still canvassing for Kristina with the kids this time, she stops at house and it turns out to be Ed’s; they stay for a break.

Amber drops by to see Drew, she tells him that he is the most important person to her and since she is getting married at city hall, they want him to be their special witness. Drew asks if everyone will be available to join them and Amber tells him that she is doing it without their mom. Drew tells her that he is there for her, but he can’t do it without Sarah, Amber walks out.

Julia and Ed are having a discussion, he says that he lies to his therapist and doesn’t want her to think he is a jerk. Furthermore, he knows he was a good salesman, not sure if he is a good father. The kids come into the kitchen where they are talking and say they are hungry.

Zeek is shoveling the ground to make a fired pit when Sarah arrives for a visit. Sarah goes in to see Camille and tells her that she told Amber she was too young to get married, Camille says she is sure that didn’t go well. Furthermore, Camille tells her it is the same thing she did with Seth. Camille says that she wished she had said nothing with her and Seth because she lost her for a couple of years. Camille tells Sarah to get out of Amber’s way.

Crosby is at the bar with the band when he gets a call from Jasmine who reminds him that he has to pick up some stuff on the way home. The band doesn’t want Crosby to drive, they tell him to have Jasmine pick them up.

Max is helping Kristina practice for the debate and he tells her to calm down because statistically she cannot win anyway.

Julia and the kids join Ed and his kids for dinner when his wife shows up, awkward! Julia is in a rush to leave, she makes the children leave their meals right there on the plate.

Jasmine is with Crosby and the band, they have all squished into the mini van.

Julia and the kids arrive home, they find that dinner is all on the table, Joel surprises them. The kids aren’t hungry, they leave, but Joel takes the time to apologize for bailing on her.

Kristina is at the debate and right from the beginning Kristina is being interrupted. Adam gives Kristina a look and you know he is telling her to be stronger and not let Bob talk over her. A woman asks a question about the school system that promised to help her daughter who has special needs and hasn’t. Bob tries to interrupt Kristina, but this time she doesn’t let him.  Kristina makes an impact on the woman and the audience as well.

Camille tells Zeek that she called the real estate agent and told her they are not interested. Then she tells Zeek that her art club is going to Italy for a month, she has decided she wants to go and she is, by herself. Camille walks away from Zeek and leaves him outside.

Crosby is in the minivan, Jasmine finds him and says that he is embracing the mini van.

Kristina finds out that she actually did very well in the debate and may just have a chance with the election.

Sarah goes to see Amber and says that she is sorry.