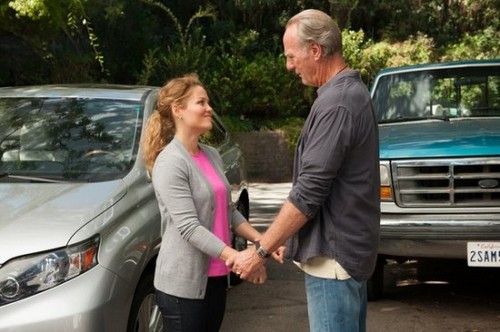 Tonight, the hit show Parenthood airs on NBC with its 4th episode of season 5. The episode is titled “Let’s Be Mad Together” and on the show tonight Julia (Erika Christensen) and Camille (Bonnie Bedelia) have something in common that does not make them happy. And Sarah (Lauren Graham) talks toe-to-toe with Ryan (Matt Lauria) and Amber (Mae Whitman).  If you missed last week’s episode, CLICK HERE for a full recap.

On last week’s episode another of Adam’s comfort zones was challenged by Kristina’s campaign, while Sarah and Amber struggled to talk to one another about the wedding. Drew tried to get closer to new friend Natalie and Zeek got a chance to provide big teaching moments to grandkids Sydney and Victor, especially Victor. Crosby handled high-maintenance rockstar Oliver Rome.


RECAP: Crosby is making lunch for Jabar, Jasmin can’t find Jabar’s backpack when Adam arrives at the door to tell Crosby that he got them a good deal. Max is at school, various kids laugh at home and then he takes a picture of a girl who is crying for the year book. The girl is upset and Max says that he is just capturing pictures for the year book. Zeek and Camille see a woman who is taking pictures of their home, she is a real estate agent. Meanwhile, Sarah tries to fix the toilet which causes water to spurt out everywhere.

Joel gets a call from work, Julie is surprised that there are so many changes. Julia tells Joel to put his foot down, he should get paid for the extra hours. Sarah calls Joel, she needs help with the toilet repair. Crosby and Adam meet with the the band who is going to be produced by them, Adam tells them to feel free with their creativity.

Kristina meets with Mr. Carlson who tells her that the photo Max took was really inappropriate; the girls’ dog died in the morning and the girl was upset. Mr. Carlson tells Kristina that he wants to move Max to layout away from photographer. Furthermore, he says that Max can always take pictures, just not for the yearbook.

Ryan goes over to Sarah’s house to help her fix the toilet. Max is with Hank who thinks that Max’s best picture is the one with the girl crying at school. Kristina walks in and tells Max that the picture will not be used because the girl’s parents are upset. Hank tells Max the picture is great and very creative. Kristina asks Max to leave and then she tells Hank that Max is in trouble over the photo and will be put on layout. Hank is very upset, he says that Max is a born photographer and should not be on lay out.

Joel is on the construction site with his client who invites him to dinner. Ryan is home and asks Amber why she didn’t tell him that she is not speaking to her mother. They continue talking and the funeral and Ryan wants to know if Sarah knows about the fight at the funeral.

Zeek is teaching his grandson how to read, Julia heads into the house to talk to Camille who tells her that she is frustrated because Zeek won’t look at a condo with her. Camille goes on to say that she would like to sell house so she and Zeek can do a lot of things that they never have. Camille tells her not to mention it anyone, she doesn’t want to burden them with it. Camille says that somewhere in her relationship with Zeek she has lost her voice over the years.

Joel is at dinner with his client.

Crosby is at the studio, he wants to leave and Adam doesn’t want him to, he tells Crosby that it is all about the client and he can’t go. Crosby leaves the studio, Adam is alone with the band who tells him that they hope Crosby is only taking a beer run.

Joel meets Crosby in the grocery star,he’s drunk and Crosby wants to drive him home. The guys start talking about life and listening to Elvis on the radio.

Kristina is at the school, she goes to see Mr. Carlson and wants Max back as photographer for the year book, regardless of the speed bumps.

It is morning and Joel admits to Julia that he was drunk the night before. Julia says that she is going to choose not to be upset that he was out late with his client and drunk. Julia asks if his client is going to pay him more for the extra work and he says no, she gets upset and when she does he tells her that it is his business and not hers.

Crosby is back in the studio, he gives the band a lecture and tells them they don’t need gimmicks, they just need to sing. Julia is at Zeek’s to pick up Victor. Julia tells Zeek about Camille wanting to look at the condo and his wanting nothing to do with it. Zeek tells her to basically mind her own business. Julia gets really upset and tells Zeek that Camille deserves to have a voice.

Ryan goes to see Sarah and tells her that his dad died when he was eleven and his mom remarried to a guy who used corporal punishment to discipline him. Ryan says that not everyone has a family like theirs, but he loves Amber so much and he is working so hard to get better, he wants to be worthy of the family. Sarah gives her consent, Ryan tells her the toilet is finally fixed.