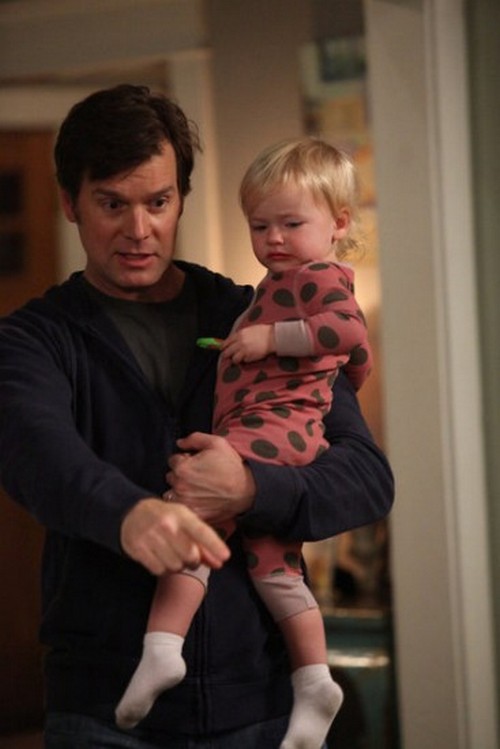 NBC’s popular show PARENTHOOD returns tonight with a whole new episode. Tonight’s eighth episode of the 4th season is called “One More Weekend With You.” On tonight’s show Crosby (Dax Shepard) and Jasmine (Joy Bryant) continue to adjust to life as a married couple as they organize an event for Jabbar’s (Tyree Brown) school. If you missed the last episode you can read our full and detailed recap here!

On last week’s show Adam and Kristina struggled to balance the pressures of daily life combined with her ongoing treatment. Camille and Crosby took on additional responsibility to alleviate the couple’s burdens. Amber and Ryan’s relationship developed causing Sarah and Zeek to be concerned. Zeek knew too much about Ryan’s past and worries about his granddaughter. Meanwhile, Julia continues to focus on Victor’s happiness and how to better connect with her new son. Drew tried to connect with Amy after their recent break up.

Tonight’s episode: Max is excited, he has a sleepover with his friend Micah, his parents are going to Vegas.  Julia and Joel are at Victor’s game and Sydney is not happy that it is always about him.

Ryan stops by to see Amber, he has to cancel on her because he has to go to a funeral, she offers to go with him on the road trip for support.  Ryan thinks about it, then says yes, he would like her to join him.

Mark gets home and goes into Drew’s room, only to find him in bed with his ex-girlfriend, Amy.

Sydney is furious at all the attention Victor gets and at a restaurant she loses it and has a tantrum.

Awkward, Mark and Drew talk Mark asks him if he is being smart and Drew says yes. Mark goes on to ask if Amy is on the pill, Drew tells him that it is none of his business. Mark starts talking about STD’s and tells Drew to protect himself, then Drew asks Mark not to tell his mom, please.

Ryan and Amber are driving, he tells her that his friend passed away from an accident.

Kristina and Adam are going crazy, the dog has to go out, the baby is crying, Max and Micah are being loud playing a game and Kristina is throwing up over the staircase.

Crosby is watching a game, Jasmine turns it off because she needs him to go run errands and they get into a fight.

After dinner, Drew asks Sarah to borrow the car so he can go out with Amy and she wants to know more. Mark intervenes and offers his car. Sarah starts to question Mark about Drew’s relationship and she figures out that he is holding back, in the end, he breaks his promise to Drew about not telling her, he says everything about catching him have sex with Amy.

Sydney is upset that she didn’t skating, she blasts Julia and Joel and reminds them that she was there first, before Victor.

Ryan and Amber are hanging out with some of his friends when they get into a disagreement about his deceased friend.

Adam has brought Kristina in some fresh water, she is still unwell when Max bursts in and says he is sleeping in his bed – Micah has to sleep on the floor – then the two get into an argument about the light. Adam thinks he can leave when Micah then reveals that he has to go to the bathroom.

Ryan and one of his friends get into a fight, it seems that their deceased friend may have taken his own life.

Sarah is at work and share with Hank that her son was caught having sex.

Max and Micah are still fighting,this time it is about checkers. Adam is upset at the way that Max is acting because Micah is his guest and Kristina is sick. Max wants to speak to his mom and Adam says to leave her alone but he doesn’t listen and barges into her room to find her on the bathroom floor.

Ryan had a fight and Amber is cleaning him up, he tells her that he would understand if she doesn’t want to be with him – she tells him that she is going nowhere. Then, Amber asks Ryan if his friend Evan killed himself and he says yes.

At the funeral, Ryan is dressed in his finest uniform and Amber is there for support.

Crosby and Jasmine are entertaining their friends, even though he wasn’t in the mood for it. Meanhwhile, Kristina is not doing any better and Adam is beside himself with worry. Adam grabs the kids and heads over to Crosby and Jasmine’s house.

Drew is doing his homework when Sarah starts to question him and says that she is just worried because he was so devastated when she broke up with him. Mark announces that he told Sarah what happened, Drew is upset.

Adam apologies to Crosby for barging in, he is there to  get weed for Kristina to take away the pain.

In the end, Crosby and Jasmine had a good party. Sarah apologizes to Mark, she tells him that she doesn’t have any experience parenting with someone else and she wants him involved. Micah has finally gone home, his parents won over $1,000 playing roulette in Vegas. Kristina is feeling better, the weed helps. Kristina thought she would be the one person to not get sick from chemo, just power through it, but that didn’t happen. Amber and Ryan are on their way back, he thanks her for going with her and supporting him. Amber pulls over and the two go swimming in the ocean as the sun is setting.