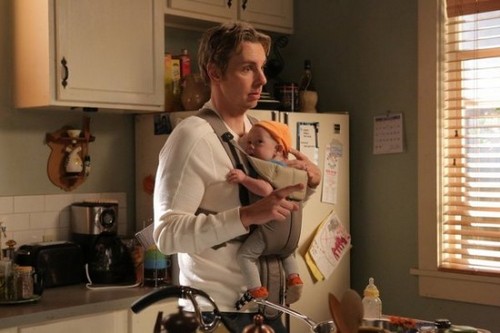 Tonight, the hit show Parenthood airs on NBC with its 4th episode of season 6. The episode is titled “All That’s Left is the Hugging” and on the show tonight Julia (Erika Christensen) and Joel (Sam Jaeger) put their best foot forward for their family’s sake.  If you missed last week’s episode, CLICK HERE for a full recap.

On last week’s episode election day stirred up emotions amongst the family- Jasmine and Crosby used the election as a teaching moment for Jabbar, while Kristina and Adam kept hopes high. Julia and Joel dealt with Victor’s reservations and Amber had some of her own, when the band asked her to sing guide vocals. Meanwhile Sarah helped Hank with a family affair. Also starring Craig T. Nelson, Max Burkholder, Miles Heizer, Savannah Rae Paige, Matt Lauria, Jurnee Smollett, Tyson Ritter and David Denman.

Kristina may have lost the election, but her family’s support has never wavered. Adam is as supportive as ever. He knows the only way their family can move past the election is to keep everyone laughing.

Sarah has a problem with her tenants. As in they have nothing except complaints waiting for her. They do have a reason to complain though. They don’t have any heat in their apartment, and their landlord tries to tell them to use blankets while she fixes the heat problem. Probably not the best answer especially when it leads to two retirees being ready for an attack. During the arguing, Sarah managed an escape with the help of another tenant. Carl rescued her by claiming he had a problem, as well. Sarah thought it would be about the heat again when surprise; his apartment is warm. It seems he’s not afraid to buy an electric heater after the whole building loses their heat. Smart thinking! It also served him by helping make a new friend… Sarah. Mind you, merely a friend and not anything else. A harsh fact he quickly learns after they slept together that very night.

By the next morning, he thought he could see her in the hallways without having a grown woman doing her utmost to hide from him. Guess he was wrong. She did eventually come around to his place to at least explain things. It was simple. All she had to say what that she wasn’t interested and he can lie and say neither is he but she knows he is.

What to know what uninterested looks like then Joel will be the best example. Joel has taken to sleeping on the couch. It’s not as if he left the family home, but Julia sure feels like he did. She has to apologize in order to fix her marriage. Although it’s not as easy it sounds; she chose to be honest with Joel. She admits the separate sleeping arrangements and the not talking is scaring her. Somehow they’ve always talked these things through before, and she wants that back. Julia doesn’t care if she has to use the children as an excuse. Apparently laying down her pride (after his was dented) was all it took. Joel is open to trying to work things out.

The very next day, he came home early and helped Julia with their kids. So he was trying when he heard from Sydney some disturbing news. Sydney mentioned how lucky Charlotte, Ed’s daughter, is because she gets to live in two homes now and one of them even has a pool. In her innocence, she didn’t know she was telling her parents Ed had separated from his wife. Then again she doesn’t know the full situation. Like how her father has been worrying himself over Julia and Ed’s new friendship.

Speaking of unwelcome problems, Ryan actions from last week nearly cost Amber her job at the recording studio. Sure, her uncles run the place but they can’t be wasting money because Ryan decides to throw a hissy fit every now and then. Also, they’re worried about their niece. Hearing about all the details in the fight, both Adam and Crosby are anxious about Amber’s safety. She tries to ease their worries and yet she fails. How can she possibly make a case for Ryan when she started to doubt him too? When Amber does return home, she talks to her fiancé. Actually talk this time instead of allowing him to brush her off. She confesses she’s not sure about their relationship. She uses the excuse that she doesn’t know how well their relationship in survive in reality.

It’s not that Ryan is a bad guy but whenever the situation becomes difficult for him; he’d rather lose all control than ever talk it out. That’s not a great start for a marriage much less their own. Ryan senses he’s losing Amber and the only way he could think of making their problems better is to get advice from Zeek. Zeek isn’t going to coddle him and he needs that. He tells Ryan that he needs to decide where he wants to fit in. In a world with Amber or without her.

Meanwhile Drew needs to decide what to do with his maybe/kind of girlfriend. He thought they were exclusive and they weren’t. No, Drew had to learn he was in an open relationship when his former jerk of a roommate informed Natalie was seen making out with another guy at a frat party. Later on, Drew bought the subject up with her and Natalie was confused why Drew wasn’t happy with their no strings arrangement. Isn’t that type of relationship basically every man’s dream.

Crosby says it is. Drew went to him to talk and his uncle was very straight forward when he says there really wasn’t anything wrong with that type of thing. He argued his case by telling Drew he was young and now isn’t the time to get serious. College should be fun and so should the girls.

Julia had to do damage control in order fix her marriage since she couldn’t leave it all to Joel. Taking action, Julia goes over to Ed’s and tells him she can’t speak (no calls or texts) to him anymore. Odd she had to tell him in person but she wanted to ask him to his face whether she was the reason his marriage ended. He reassures her by telling her she wasn’t. He claims he was unhappy long before he met her. Nevertheless it doesn’t stop him from kissing her.

She pushes him away… after a few seconds of kissing him back.

Amber was warned to go speak to her mother about Ryan or else her uncles would do the talking. She does but first she asks her mom to be objective. She couldn’t take it to have Sarah judging her or trying to make choices for her. Sarah gets it and she tells her daughter she thinks Amber can handle a relationship with Ryan. However as her mother, she wants more for Amber.

Amber goes to Ryan and she’s ready to make a choice when she learns too late. He already made one. Ryan went behind her back and re-enlisted in the army. He couldn’t take to civilian life like Amber wanted and so he ended any kind of life they could have had together.

Kristina was feeling low about the elections. An ignorant mother at the playground didn’t know the race was over when she promised to vote for Kristina. And then she still expected for Kristina o fix one of the slides. She might have thrown that it after Adam made a smart remark over his wife losing because of the poor turnout. Still was that woman expecting Kristina to fix it by hand after that; who knows? Not even Gwen or her pot could make her feel better once that run-in. What did the trick was something Adam thought up. As opposed to their usual date night, he took her to Bill Little’s election billboard. There, and with a couple of eggs, they were able to enjoy themselves by stretching out their old throwing arms.

Drew couldn’t do fun. He tried it and then he ruined it. He was telling Natalie they could be no strings as long as there were rules in play. Sadly, she didn’t like the rules part and told him they should go back to being friends. That conclusion hurt him but there’s someone else ready to make him happy right around the corner. Namely, Amy the ex!

Did Amy return to make amends for dumping him or does she want to get back together?