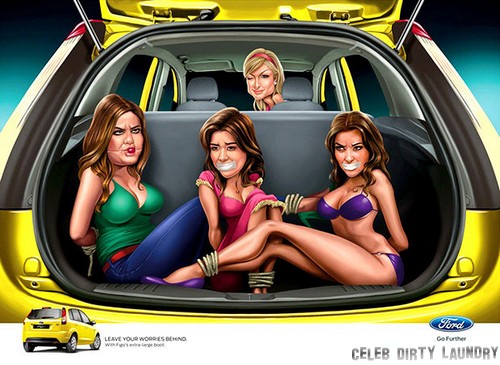 You already know how much we love us some Paris Hilton. Now, we’ve gotten another good reason to love her: She was featured in a leaked ad by Ford and she has those Kardashian nitwits bound and gagged! You just don’t get any better than this, do you?

The ad featuring Paris in the driver’s seat of a Ford Figo and she has apparently tied up Kim, Kourtney and Khloe Kardashian. We’re guessing that they are trying to say that if the trunk of this vehicle can hold a Kardashian (Kim’s butt!) then it should be big enough for whatever customers want to store in it.

You have to admit, they have a point in featuring the Kardashian hiney. The hiney sells (even haphazardly) and so it was funny that the creative department for the agency decided to gag all three of those famewhores.

The Kardashian sisters are said to be considering legal action and Ford has apparently tucked their tails between their legs and have issued a nice, tidy apology. Firstly, the ad agency, WPP Group, said, “We deeply regret the publishing of posters that were distasteful and contrary to the standards of professionalism and decency within WPP Group. These were never intended for paid publication and should never have been created, let alone uploaded to the Internet.”

Ford chimed in to say, “These were posters that were concepts to be entered in a creative ad competition in India. They were never intended as any sort of campaign or paid use…as such, they did not go through the normal approvals and process before being uploaded to a website.”

Somebody has NO sense of humor!