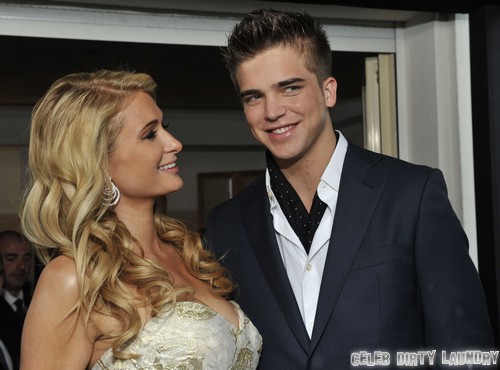 Reports are that a fight broke out between Paris Hilton’s boyfriend River Viiperi and a female fan at the Cannes film festival. According to the report, Paris and River were trying to get to a party, but were blocked by a horde of paparazzi and fans.

The report on TMZ states that ‘an overzealous fan’ kept coming closer and closer, despite repeated warnings not to. In the end, River came to the rescue and pushed her away from Paris. Of course, the story’s been sensationalized and is now being called ‘an altercation’ between River and a female fan. In actuality, it was just River protecting his girlfriend from a possible psycho fan – after all, it is Cannes and there’s tons of loony bins around.

That being said, why was the security so incompetent? I mean, all they had to do was clear a path for Paris and River to get through to the party. Instead, Paris gets nearly attacked by a fan and then groped by security. Later in the video, you can actually see River telling the security to keep their hands of Paris, but of course, they don’t listen. That ended up leading to another ‘altercation’ between River and the security, but thankfully that was under control fairly quickly.

The whole thing was an exercise in futility because there might as well not have been any security there, for all the good they did. Then again, it’s not like Cannes is exactly known for their top-notch security details. I mean, this is the same festival where a crazy person was allowed to fire blanks several feet away from Christoph Waltz on a crowded red carpet. Imagine if the blanks were not actually blanks in the guns, but actual bullets?

There’s a lesson to be learned here – don’t go to Cannes if you’re a famous person and don’t have your own private security detail.