Looking at Barron Hilton, you could see why his family would want revenge against the people that did this to him. No offense to the young man but it’s obvious someone beat him pretty badly. It takes a lot to break through human skin much less cut up Barron’s face like that. After seeing the photo of her brother, Paris Hilton, left a message to everyone following his story: “They both will pay for what they did. No one f***s with my family and gets away with it!!“

There’s nothing wrong with wanting to protect your family but its doubtful whether the culprits **cough* Lindsay Lohan & co. *cough** will see any criminal charges. The story goes that Lindsay Lohan overheard Barron bad mouthing her to her newest boyfriend. Being the angry and defensive mess we all know , she got one of her friends to confront Barron for her. By confrontation, I mean pummel. It was probably embarrassment on her part that led her to be reckless enough to be on the scene during the fight and lie about it afterwards. 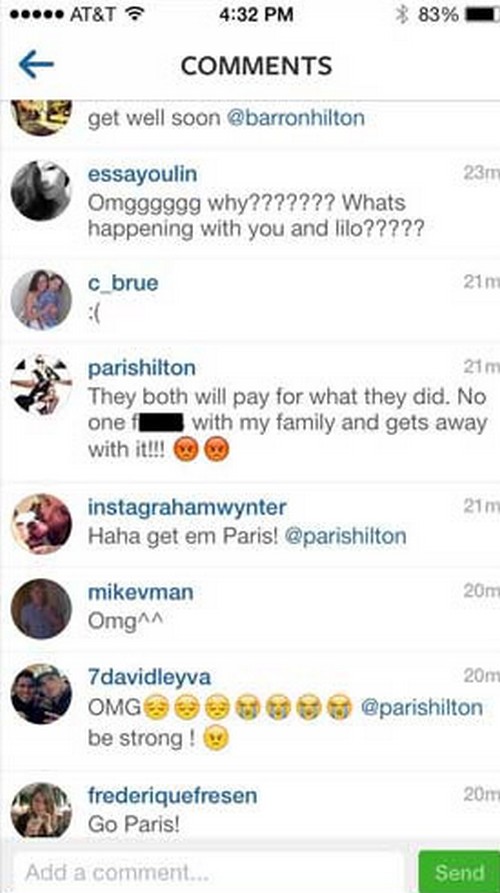 Lindsay and her pathologically lying dad tried to claim she wasn’t even at the house during the fight. Sadly for the sociopaths, video proves otherwise – sorry Lindsay its called camera phones. It’s a new invention that’s been around since the early 2000s. She mustn’t have gotten the memo – was she too cracked out to take notice?  Either way there’s proof she was there and now in true crackhead Lindsay style she’s done a  runner.

Cops came by to question her at her hotel and it wasn’t long before Lindsay suddenly decided to change her location. Which makes her incredibly dumb. Why run?!?! That will always make you look guilty. If she stuck around then maybe she would have heard that some eye-witnesses claim she wasn’t involved. Now those people will automatically be tagged her friends and therefore liars. Sure, Lindsay was in lock-up for what felt like less than a minute but you would have thought it instilled common sense. Guess not!  Will Paris Hilton finally be the one to bring down Lindsay Lohan?